BY hellodrdavis on January 20, 2020 | Comments: one comment
Related : Soap Opera, Spoiler, Television, The Bold and the Beautiful 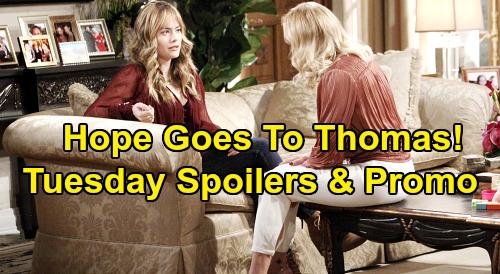 The Bold and the Beautiful spoilers for Tuesday, January 21, tease that Sally Spectra (Courtney Hope) will make a big move. As B&B viewers know, she just faced a difficult situation with Wyatt Spencer (Darin Brooks). Wyatt tried unsuccessfully to break up with Sally, telling her that he is still in love with Flo Fulton (Katrina Bowden) and that he wants to try to make things work with her.

Of course, Sally was already facing devastation on the work front, as she’s facing a possible firing from Forrester Creations. She just couldn’t handle the thought of Wyatt deserting her, too, and so she refused to accept the breakup.

In Sally’s mind, she’s been down this road before, when Wyatt left her for Flo, and in the moment, she sees the whole thing as temporary and something that she can fix if she’s insistent enough.

So on Tuesday’s episode, Sally will head straight to Flo’s apartment and confront her about the situation. Sally’s going to be in fight mode, and B&B spoilers say that she’ll set the record straight about her relationship with Wyatt.

She’ll probably tell Flo that she’s going to fight for Wyatt and that she won’t stand for Flo swooping back in and stealing her man for the second time.

We’ll see how that goes over. Flo just might point out that the decision really isn’t hers or Sally’s to make…that decision belongs to Wyatt, who seems to know exactly what he wants now.

Of course, Sally’s been off lately due to her impending health problem, so who knows what will happen when she and Flo face off. It could end up being quite the scene.

Meanwhile, on the new episode of B&B on Tuesday, January 21, Thomas Forrester (Matthew Atkinson) will score a big win. As B&B viewers know, Thomas recently orchestrated a situation in which Hope Logan (Annika Noelle) caught Liam Spencer (Scott Clifton) and Steffy Forrester (Jacqueline MacInnes Wood) kissing on the cliffside. He hoped that this would cause serious turmoil in Hope and Liam’s relationship, and he was right.

Hope ended her relationship with Liam as a result, which is exactly what Thomas wanted. And on Tuesday’s episode, he’ll be over the moon when Hope allows him to comfort her as she’s hurting from the split.

They might encounter each other at Forrester Creations, or perhaps they’ll see each other as they’re handing off Douglas Forrester (Henry Joseph Samiri). At any rate, B&B spoilers are clear that Hope will need comforting, and Thomas will provide it.

Of course, this is all working out just the way that Thomas wants – his main goal for months has been to drive a wedge between Hope and Liam so that he could eventually swoop in and take care of Hope.

Thomas managed to manipulate Hope masterfully, and it looks like his next goal will be to get Hope to see that he’s there for her in a way that Liam can’t be. Hope just wants someone who’s totally devoted to her, and now it’s Thomas’ chance to show his devotion.

That does leave us wondering, though, about where things will stand between Thomas and Zoe Buckingham (Kiara Barnes) going forward. Thomas may still need to pretend to have a relationship with Zoe for a while, so that Hope doesn’t jump to the conclusion that Thomas is obsessing over her again.

We’ll see how things will go between Hope, Zoe, and Thomas, but it could start to get complex very soon.