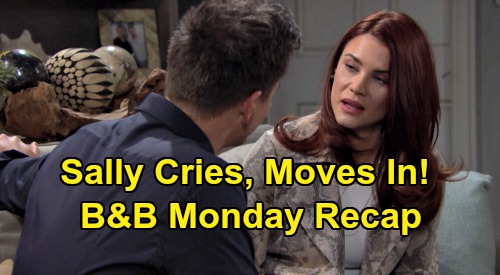 Wyatt was concerned that the whole plan for Sally to move in with him could be a bust, but Flo was a bit more optimistic, and Bill said he was impressed with both Wyatt and Flo’s efforts where Sally was concerned. Wyatt then got a text from Sally asking to meet at his place. He and Flo bid each other farewell, possibly for the last time for a while, and Bill said he was proud of Wyatt.

Meanwhile, over in the Forrester design office, Katie urged Sally to take Wyatt’s offer, but Sally balked, saying that she’d rather be alone than pitied. Katie said, “He doesn’t pity you,” leading Sally to suspect that Katie told Wyatt the truth about her condition. She grilled Katie, but Katie covered, saying that she was sure that Wyatt wouldn’t pity her if he knew.

Katie continued to get Sally to tell Wyatt the truth, but she refused. Katie urged Sally to accept Wyatt’s love since she needs him right now. Sally sent Wyatt his text, with her hand shaking uncontrollably, and he texted back agreeing to meet her at the beach house. Katie wondered what Sally was going to say to Wyatt, and Sally didn’t know – she thought it might be easier to just walk away.

Sally then took off for Wyatt’s place, leaving Katie alone in the Forrester design office. Soon, Flo came in and wondered if Katie knew what Sally was going to say to Wyatt. Katie said no, and that she felt terrible lying to Sally, which Flo understood. However, they agreed that if lying meant that Sally could die on her own terms, then it was worth it.

Katie wondered how Flo was doing with all of this, and Flo reiterated that she wanted this for Sally, and that she felt secure in Wyatt’s feelings for her. She said that she’d be more bothered if Wyatt would have turned his back on Sally, and Katie remarked the he never would have done that. Flo hoped that Wyatt would make Sally’s last days happy and peaceful.

At Wyatt’s place, he waited for Sally, and as he did, he flashed back to some of their happy times together in the beach house. Sally soon arrived and thanked Wyatt for giving her time to process everything. She said that she thought his sentiments came out of nowhere, and he insisted that his love for her was enduring and not out of nowhere.

Sally wanted to know if Wyatt was over Flo, and he said that Flo was important to him and that wasn’t going to change, but that right now he wanted to make a life with Sally. Sally then indicated that she was going to stay, and that she wanted to be here with Wyatt for as long as she could be. That made Wyatt happy and the two hugged.

Wyatt confessed that he had been thinking about past memories, and that he would remember this day for a long time – the day she came back to him all radiant and beautiful. Sally said that because of Wyatt, she did feel radiant today.

They took hands and Wyatt said that he was there for her, and that no matter what life threw at them, they’d deal with it together. They hugged again, and Sally cried happily, saying that he had just given her a life worth living.

There’s a lot of B&B drama heating up, so stay tuned! We’ll be sure to provide more updates as B&B news comes in. Stick with the CBS soap and check back with CDL for your Bold and the Beautiful spoilers, updates, and news.