BY hellodrdavis on March 27, 2020 | Comments: 2 comments
Related : Soap Opera, Spoiler, Television, The Bold and the Beautiful 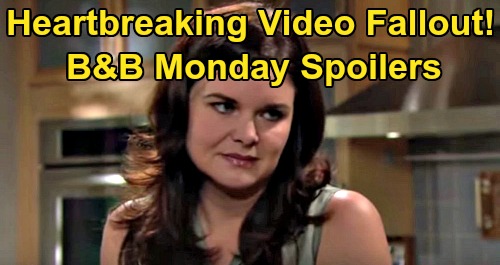 The Bold and the Beautiful spoilers for Monday, March 30, tease that the terrible scene unfolding at the reunion party for Brooke Forrester (Katherine Kelly Lang) and Ridge Forrester (Thorsten Kaye) will continue. As B&B viewers know, Ridge has just punched Bill Spencer (Don Diamont) and he’s declared that he’s “done” with Brooke forever. Brooke is totally in the hot seat, with both Ridge and Katie Logan (Heather Tom) angrily demanding answers.

It doesn’t look like things are going to get any easier for Brooke on Monday’s episode – she’s just professed how sorry she is about the kiss with Bill and has asked Ridge to forgive her. But don’t expect Ridge to offer forgiveness anytime soon. In fact, it looks like he’s going to stay put and continue to rail against Brooke and Bill.

Of course, Quinn Forrester (Rena Sofer) was thrilled as she watched the whole kerfuffle unfold before her eyes. It was quite the scene, as both Ridge and Katie lashed out at Brooke and Bill. One can only imagine what Katie is thinking here – after all, she reunited with Bill only after she made darn sure that he wasn’t still pining after Brooke.

Katie also made sure that Bill’s head was on straight and that their relationship was solid before she recommitted to Bill. B&B viewers will remember that she even tested Bill by unleashing Shauna Fulton (Denise Richards) onto him in a faux seduction test. Bill passed with flying colors, and Katie decided to take him back.

And what makes this particularly devastating for Katie is that Will Spencer (Finnegan George) is involved here as well. Katie has Will to think about, and she’ll probably soon remind Bill that the very reason she was hesitant to reconcile with him in the first place was to shield Will from the inevitable pain that his future behavior could cause.

But back to Quinn for a moment. B&B spoilers for Monday, March 30th, indicate that Quinn will end up admitting that she was the one who uploaded the video of Bill and Brooke’s kiss to the digital feed.

We’ll see how that all gets out in the open, but it’s likely that Brooke will “out” her. Or perhaps Quinn will just get ahead of the accusation and come right out with it.

At any rate, it will become known on Monday’s episode that Quinn was behind the video. That could cause some friction between Quinn and Eric Forrester (John McCook) going forward, so we might see a tense interaction between those two. But we doubt that Quinn will be feeling repentant, given that this has all worked out just the way she planned.

Meanwhile, over at Flo Fulton’s (Katrina Bowden) apartment, Shauna will tell Flo the whole story about why she’s really returning to Las Vegas. Flo will listen as Shauna recounts how she went to Brooke’s mansion to urge her to reconcile with Ridge, then caught Brooke kissing Bill in the cabin.

Shauna will apparently cop to taking the video of Brooke and Bill kissing, but she’ll soon explain that she later deleted the video. Of course, Shauna doesn’t know at this point that Quinn stole the video from her and is in the middle of causing the huge scene over at the Forrester mansion.

Shauna simply thinks that she needs to get out of Dodge and leave this Ridge situation behind her, since it currently looks like she has no shot with the fashion mogul. But B&B spoilers indicate that in future episodes, she may start to feel more hopeful about having a future with Ridge.

Monday’s episode sounds action-packed, and you won’t want to miss a moment of what happens with Quinn’s confession, with Brooke and Ridge, and with Shauna. We’ll be sure to keep you informed as more B&B news comes in. Remember to visit CDL often for all your latest Bold and the Beautiful spoilers and recaps.