The Bold and the Beautiful Spoilers: Monday, October 19 Recap – Thomas Endorses Finn & Steffy – Hope Tells Liam How It Is 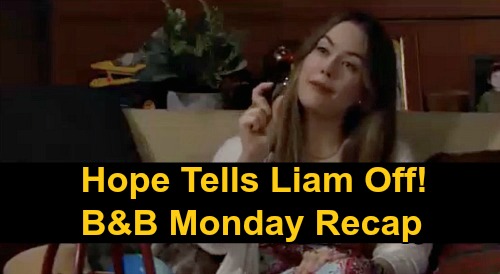 Finn said that even though the circumstances weren’t ideal, he celebrated the day Steffy came into his life. Talk then turned to Liam Spencer (Scott Clifton), and Steffy noted that Liam had been out of line earlier.

Finn said that apologies weren’t necessary, and that they didn’t need anyone’s approval to be together, but that he understood that Liam was protective of Steffy and Kelly Spencer (Colette and Avalon Gray).

“Do I have reason to be worried?” Steffy said with a smile. Finn said jokingly that if Steffy needed to be protected by his desire to spend lot of time around her, then yes.

“Spending time together works for me,” Steffy said happily, going on to say that she wants to get to know him better. “We’re going to have fun – you know that, don’t you?” Finn asked.

Soon, Thomas Forrester (Matthew Atkinson) walked in the house with flowers for his sister. Thomas sat and talked with Finn and Steffy, telling Finn that he’s grateful for everything he’s done for Steffy.

Steffy mentioned that Ridge Forrester (Thorsten Kaye) had stopped by, and she said that it was nice to see Thomas outside of rehab, too. Thomas said that he heard about Liam’s visit earlier, and Steffy said that Liam didn’t approve of Finn. “I’m crushed,” Finn said with a smile.

Thomas wondered how Steffy was going to handle Liam, and Steffy said that she wouldn’t – and that Liam was the one who would have to change his attitude.

Thomas offered a reasoned opinion, saying that he could relate to Liam’s concerns as a father, but that it was great that Steffy was sticking up for herself.

Finn was happy to be accepted by Thomas, and Finn said that the bottom line was that Liam is married to Hope Spencer (Annika Noelle). Thomas said that no one knew that better than he did, and Steffy was glad that Thomas had found acceptance of Liam’s marriage to Hope.

Thomas mentioned wanting to get back to work on Hope For The Future, and how Hope now wanted to work with Zende Forrester Dominguez (Delon de Metz). Steffy offered to speak with Hope, but Thomas said that he would fix this himself.

Talk turned back to Steffy and Finn, and Steffy said that Finn was a part of her life now and that Liam would have to deal with it. Thomas looked askew and the evil “Thomas” music played briefly.

At the cabin, Hope and Liam arrived, and Hope wanted to talk about what was motivating Liam’s animosity toward Finn. Hope thought that Liam might be jealous of Finn, and Liam blustered that he wasn’t jealous.

“It’s kind of looking that way to me,” Hope said. “You don’t get to have a say in Steffy’s personal life.” Liam said that he wanted to protect Steffy and Kelly, but Hope fired back that Steffy and Finn were consenting adults.

Liam then tried to argue that Steffy wasn’t really consenting, since her judgment had been impaired, and he went on about how it was Finn’s job to see the signs of addiction and he didn’t.

“Steffy doesn’t blame him for that,” Hope pointed out, going on to say that Finn seemed like a good guy who cares about Steffy and who makes Steffy happy.

“I think that deep down, you’re trying to control Steffy’s life, including the man she’s dating,” Hope said.

Hope asked Liam for his attention to THEIR family. Liam looked really conflicted.

In the Forrester Creations design office, Zoe Buckingham (Kiara Barnes) gave Zende a flirty fashion show as she modeled the dress that Zende had designed. Zoe even turned down the lights and put on some music, saying that the dress felt great as she knew it would. “Walk for me,” Zende instructed, which Zoe did.

Zende was very appreciative, and he said that watching Zoe model the dress gave him a few ideas for tweaking the design. Zende said that Zoe was beautiful, talented, and smart, and that Carter Walton (Lawrence Saint-Victor) was a lucky guy.

Zoe’s face fell, and she revealed that Carter asked her to move in with him, but that she said that she couldn’t.

That was a terrific episode of B&B, and the rest of the week is shaping up to be great as well! Stick with the CBS soap and don’t forget to check CDL often for the latest Bold and the Beautiful spoilers, updates, and news.