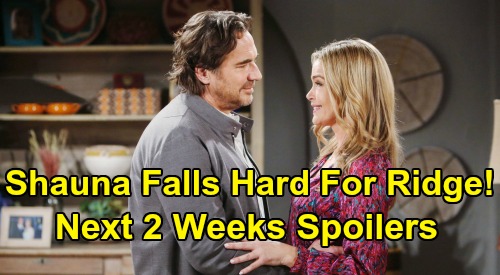 The Bold and the Beautiful (B&B) spoilers for the next two weeks tease that some hot drama’s brewing. During the week of April 6-10, Flo Fulton (Katrina Bowden) will grow increasingly suspicious after an intense meeting with Dr. Penny Escobar (Monica Ruiz). Flo would never expect Dr. Escobar to divulge any medical details, but she’ll still be surprise when the doc shuts her down entirely.

Dr. Escobar will snap at Flo for trying to figure out ways to assist Sally Spectra (Courtney Hope). Penny will feel like Flo needs to butt out, so Flo will wonder why she’s so adamant about this. B&B spoilers say Dr. Escobar will be rattled and hopeful that she can get Flo off her back.

Meanwhile, Zoe Buckingham (Kiara Barnes) and Steffy Forrester (Jacqueline MacInnes Wood) will talk about Sally’s living situation. Zoe will think that must be an odd arrangement, especially for still-in-love Flo and Wyatt Spencer (Darin Brooks). Steffy might think Sally’s health and happiness have to be the priority – no matter how strange this whole setup is.

Over with Sally, she’ll tell Wyatt she needs him. Wyatt will assure Sally that he’ll be right by her side, but physical proximity won’t be enough for Sally anymore. In an effort to seal the seal on winning Wyatt back, Sally will refuse to seek treatment unless they’re together again. It sounds like Sally will want Wyatt to break up with Flo and just concentrate on helping her get well.

Of course, Sally will still be scamming! She’s not actually dying, which Flo could discover before long. In the meantime, Flo will at least discover some fashion sketches in Dr. Escobar’s office. Alarm bells will go off like crazy when Flo starts putting together this Penny and Sally fashion connection.

After Sally meets with Penny again, she’ll realize her partner in crime’s more frazzled than ever. Sally will hate that Flo’s making matters worse, so she may decide to do something about it!

Next, Ridge Forrester (Thorsten Kaye) and Shauna Fulton (Denise Richards) will enjoy their Vegas adventure. There’ll be so much to see and do, but the important thing will be appreciating this bonding time.

Ridge will love the chance to get to know Shauna a bit better and leave his Brooke Forrester (Katherine Kelly Lang) drama behind for a while. Shauna already loves Ridge, but she’ll fall harder than ever during this trip. The Bold and the Beautiful spoilers say Shauna will want to make Ridge feel special, so she’ll put a smile on his face with a surprise VIP Vegas experience.

Back with Brooke, she’ll deal with some strong emotions as she searches for Ridge. Brooke will hold out hope that they still have a future together, especially since she’ll be reminiscing about the past. It would break Brooke’s heart to think their love story couldn’t continue, so she’ll want to find Ridge and fix this.

Speaking of fixing things, Donna Logan (Jennifer Gareis) will hope to repair her sisters’ damaged bond. However, Katie Logan (Heather Tom) will have no interest whatsoever in forgiving Brooke for yet another betrayal with Bill Spencer (Don Diamont). Katie will stand her ground on that for now.

As for Quinn Forrester (Rena Sofer), she’ll have problems of her own. Quinn will try to make Eric Forrester (John McCook) see things from her perspective, but that’ll be easier said than done. During the week of April 13-17, Bill will try to put some fear in Quinn. They’ll have a heated showdown that results in Bill delivering a major threat, but Quinn may not be too scared – not yet anyway!

Across town, Flo will play detective in hopes of exposing Sally. The more Flo thinks about those fashion designs in Dr. Escobar’s office, she more she’ll think something’s off about all this. Flo may eventually suspect Sally could be lying about her terminal diagnosis.

Flo will at least want to get to the bottom of Penny and Sally’s connection, so that may be where this detective work comes in. It couldn’t hurt to dig into Dr. Escobar’s background a bit – just to find out her dreams and see how well she actually knows Sally.