The Bold and the Beautiful Spoilers: Ridge Learns Shauna Slept With Bill – Breaks Up With New Girlfriend In Disgust?

BY hellodrdavis on April 4, 2020 | Comments: one comment
Related : Soap Opera, Spoiler, Television, The Bold and the Beautiful 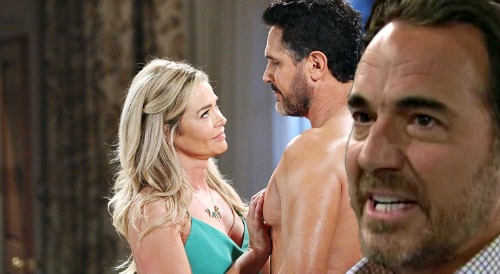 The Bold and the Beautiful (B&B) spoilers tease that Ridge Forrester (Thorsten Kaye) and Shauna Fulton (Denise Richards) will have a big adventure in Las Vegas. As B&B viewers know, Ridge decided to head to Las Vegas with Shauna after finding out that Brooke Forrester (Katherine Kelly Lang) had betrayed him by kissing Bill Spencer (Don Diamont). Seeing Brooke in Bill’s arms again was the last straw for Ridge as far as his marriage is concerned.

Of course, the animosity between Ridge and Bill has gone on for years, and Ridge finally decided that he had had enough of Brooke’s constant pull toward Bill. And now Ridge has someone fresh and new to be with, and that sounds pretty good to him.

Ridge has commented to Shauna very recently that she’s like a fresh start for him and that there’s no baggage between the two of them. It looks like Ridge is looking forward to getting to know Shauna and starting a new chapter of his life.

But there could be a big problem here, since Shauna actually has a past with Bill. B&B viewers will remember that back when Shauna first came to Los Angeles, there was the whole question of Flo Fulton’s (Katrina Bowden) paternity. Flo and Wyatt Spencer (Darin Brooks) were seeing each other, yet there was the distinct possibility that both Flo and Wyatt were Bill’s children.

Back in the day, Shauna had a brief relationship with Bill, and although details about that relationship have been scare on the show, it was at least possible that Bill could have been Flo’s father. Well, Storm Logan (William deVry) turned out to be Flo’s bio dad, and B&B viewers haven’t heard much lately about what actually went on between Shauna and Bill back then.

Of course, we should note that Ridge wasn’t a part of the storyline about who Flo’s bio dad was, and it’s not entirely clear that Ridge even knows that Shauna has been with Bill in the past.

It seems pretty doubtful that Ridge knows, and if he did, he might not be so keen on embarking on a new relationship with Shauna. Ridge just seems really sensitive right now to his women having been with Bill, and it could totally turn him off of Shauna.

Who knows – maybe Ridge will be disappointed once he finds out that Shauna has a history with Bill. Or, maybe the relationship will be long enough ago and not serious enough for Ridge to care. After all, it’s not like Shauna still feels a pull toward Bill in the way that Brooke clearly does. Rather, Shauna seems to not really care for Bill at all.

Still, though, Ridge could get upset upon learning about Shauna and Bill’s history, especially if he gets blindsided by it. Ridge tends to have extreme reactions where Bill is concerned, and he might fly off the handle to learn that Shauna has been with Bill, too. Might he actually break up with his new girlfriend over the whole thing?

We’ll see what happens here, but Shauna would do well to make sure that Ridge finds out about her history of sleeping with Bill from her, and not from someone else. It’s probably not the kind of information that Ridge will enjoy hearing, at least not at first!

Stick with the Bold and the Beautiful and with CDL for all the latest B&B news. Here at CDL, we’ll keep you current on all your soap news and the hottest B&B spoilers and recaps!