BY hellodrdavis on March 30, 2020 | Comments: 2 comments
Related : Soap Opera, Spoiler, Television, The Bold and the Beautiful 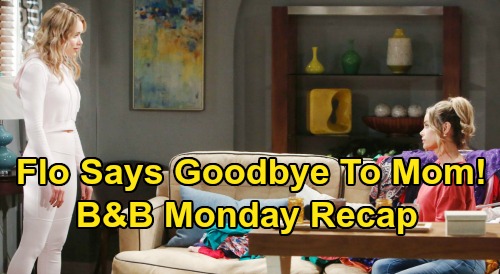 The Bold and the Beautiful spoilers recap for Monday, March 30, reveal that Brooke Forrester (Katherine Kelly Lang) stood in tears before Ridge Forrester (Thorsten Kaye) and begged him to forgive her. Ridge wondered if she was sorry about making out with Bill Spencer (Don Diamont) or if she was just sorry about getting caught. Eric Forrester (John McCook) attempted to intervene, but Ridge shooed him away.

Ridge then turned to Katie Logan (Heather Tom) and apologized to her for what had happened. Katie thanked him for caring, and Bill tried to interject something, but Katie shut him down. Brooke then told Katie that she shouldn’t punish Bill over a kiss that meant nothing. Katie fired back that she must mean nothing to Brooke – after all, Brooke risked everything for something meaningless.

Bill then suggested that he and Katie go home, but Katie refused, saying that they could talk right then and there. Katie ranted about how Brooke and Bill could do this after everything she went through last time. She said that Bill was incapable of being faithful to her, and that Brooke had humiliated her.

Ridge asked Brooke why she would do this to her own sister, prompting Bill to tell ridge to blame him. That nearly led Ridge to go after Bill again, but Eric intervened, saying that they shouldn’t turn this into a brawl. Brooke sobbed and she promised it would never happen again, but Katie said that it loses impact the 3rd or 4th time you say something like that.

Quinn Forrester (Rena Sofer) then piped up, saying that she couldn’t take Brooke’s words anymore, and that the only reason Brooke was having an attack of conscience right now was because she knew she was going to be caught. Quinn openly admitted to being the person who uploaded the video to the digital picture frame, horrifying Eric. Quinn went on, saying that she was not even a little bit sorry.

Ridge then asked why Quinn would do this, and Quinn stated that someone had to hold Brooke accountable. Quinn turned to Katie and apologized but said that she had to do it. Brooke then interjected that Shauna Fulton (Denise Richards) took the video, and that she’s been after Ridge since day one.

Quinn balked at that, saying that if Shauna were after Ridge, then she’d have him by now, and that it’s only because of Shauna’s restraint that Brooke was given a second chance. Quinn said that no one should be defending Brooke, not even Eric, since she betrayed her own sister and her husband.

Quinn railed against Brooke, saying that this was the same sick behavior that Brooke had been poisoning the Forrester family with for years. Quinn then turned to Ridge and told him that she was sorry, but that he didn’t deserve Brooke. “Stand up for yourself and kick her to the curb,” she told Ridge, “and move on with a woman who deserves you.” Brooke then spoke up, telling Ridge not to listen to Quinn.

Brooke said that she wasn’t perfect, but that she’s impulsive, and that she made a mistake that hurt the people she loves. She said that she should have been the one to tell Ridge about the kiss. Bill then turned to Katie and said that in all honesty he wasn’t going to tell her about the kiss because he didn’t want to hurt her. Katie reeled.

Ridge then turned to Brooke and said that he had been so looking forward to this party and to getting back together, but then this happened. He called Brooke his blessing and his curse. Brooke insisted that they’d work this out, but Ridge told her not to come after him, or to call him. “Just let me be,” Ridge said. And with that Ridge left.

Meanwhile, over at Flo Fulton’s (Katrina Bowden) apartment, she talked with Shauna about Bill and Brooke’s kiss. Flo initially thought that it was just a rumor, but Shauna eventually revealed that she had witnessed the kiss. Both Flo and Shauna expressed how bad they felt for Katie and Ridge.

Flo quickly realized that Shauna could easily get Ridge all for herself if she disclosed the kiss to Ridge, and she was proud of her mom for not being “that person.” Shauna said that timing was everything, and that she and Ridge either missed their moment, or that it’s yet to come…or not.

Eventually, Flo got it out of Shauna that she had recorded the kiss on video, but Shauna explained that she had deleted the video and was going back to Las Vegas so no one would ever know. Shauna and Flo hugged, and Flo didn’t want her mom to go, but she understood. Shauna said that it was time for her to forget about the most incredible man she’d ever met.

At the Forrester mansion, Ridge poured himself a stiff drink, then turned down a photo of himself with Brooke that happened to be sitting around. Quinn, who was there also, said that she knew Ridge was upset, but that she wasn’t going to apologize for what she did. Ridge asked how Quinn got the video, and Quinn explained about secretly taking it from Shauna.

That was a terrific episode of B&B, and there will more drama coming up this week, so stay tuned! We’ll give you updates as B&B news comes in. Stick with the CBS soap and don’t forget to check CDL often for the latest Bold and the Beautiful spoilers, updates, and news.