The Bold and the Beautiful (B&B) spoilers for the next two weeks tease that major drama’s on the way. During the week of September 21-25, Steffy Forrester (Jacqueline MacInnes Wood) will be a disoriented mess when Liam Spencer (Scott Clifton) shouts and slaps her awake.

It’ll lead to a confrontation where Liam finds Steffy’s pill bottle and flips out.

After Steffy orders Liam to leave, he’ll refuse to do it unless he takes Kelly Spencer with him. Liam will also hurl accusations about Dr. John “Finn” Finnegan (Tanner Novlan) giving Steffy more pills, but she’ll confess someone else supplied them.

Once Liam takes Kelly out of Steffy’s house, she’ll freak and accuse Liam along with Hope Spencer (Annika Noelle) of kidnapping her child.

Over with Thomas Forrester (Matthew Atkinson), he’ll apologize to Hope for his past misdeeds. Hope will be proud of Thomas for reining his behavior in and trying to put Douglas Forrester (Henry Joseph Samiri) first.

Thomas and Hope will agree that Douglas is what’s most important, so they’ll resolve to concentrate on him as they form a new coparenting plan. 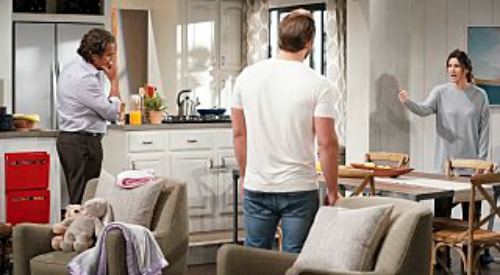 Later, Thomas will hear about Steffy’s kidnapping accusation and bizarre actions lately. After Thomas relays the news to Ridge Forrester (Thorsten Kaye), it’ll leave this dad panicked. Ridge will be deeply concerned for Steffy’s well-being, so he’ll want to find his daughter ASAP.

Meanwhile, Hope will think back on some things Thomas said about Liam and Steffy. As Hope’s old insecurities bubble up, she’ll vent to Brooke Logan (Katherine Kelly Lang) and get some support.

Afterward, Brooke will find herself stuck in a showdown with Steffy, who’ll blow her top and take aim at Brooke.

If Brooke’s on babysitting duty, this could spell serious trouble! The Bold and the Beautiful spoilers say Steffy will feel like the walls are closing in. She won’t think anyone’s on her side as she makes a dangerous choice while she’s on drugs.

This could lead to a physical attack on Brooke and a Kelly kidnapping attempt based on the sound of things.

Back with Thomas, he’ll have a heartfelt apology for Zoe Buckingham (Kiara Barnes) next. B&B spoilers say Thomas will be truly sorry for hurting Zoe, so he’ll hope she can find it in her heart to forgive him.

Zoe’s all about moving on with Carter Walton (Lawrence Saint-Victor) and focusing on the future, so she should offer Thomas the forgiveness he seeks.

During the week of September 28-October 2, Steffy’s addiction will spiral out of control and bring some terrible moments. Ridge will see that he has to make a drastic move, so he’ll come together with Finn and Liam for Steffy’s intervention.

The three of them will take turns explaining to Steffy why she needs help.

The Bold and the Beautiful spoilers say Steffy won’t respond well to this intervention, so expect an emotional meltdown. It may take a little more work and some threats regarding Kelly to make Steffy see the light.

As for Brooke, she’ll get some devastating updates from Ridge. He may explain that Steffy’s hooked on drugs and reveal that it was the true reason for her attack on Brooke.

It sounds like the next two weeks will be packed with action, so stay tuned to B&B. CDL’s your go-to source for fantastic Bold and the Beautiful spoilers, updates and news, so be sure to stop by often.

Steffy's family and friends gather around her on B&B. 💙 #BoldandBeautiful is new this week on @CBS and @CBSAllAccess. pic.twitter.com/z9o8HxMCuI