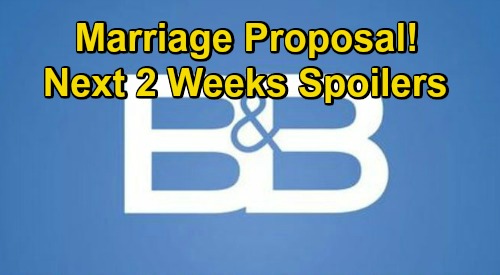 The Bold and the Beautiful (B&B) spoilers for the next two weeks tease that we’ll see some tough decisions and alarming moments. During the week of November 9-13, Thomas Forrester (Matthew Atkinson) will become consumed over his connection to the Hope Spencer (Annika Noelle) mannequin.

Thomas’ relationship with that doll will head in an unsettling, extreme direction. Liam Spencer (Scott Clifton) can tell Thomas is obsessed as ever thanks to that mannequin he’s been hiding.

When Liam voices his concerns to Hope and Steffy Forrester (Jacqueline MacInnes Wood), he’ll be met with skepticism.

Once Steffy and Hope hear Thomas’ explanation, they’ll be on the same page about Liam overreacting. When Liam fights harder to convince Hope and Steffy that he’s right, John “Finn” Finnegan (Tanner Novlan) will weigh in.

The Bold and the Beautiful spoilers say Liam will get a lecture as Finn puts him in his place.

It sounds like Finn will think Liam needs to chill with all the accusations and constant Thomas negativity. Steffy will probably be upset over Liam bashing her brother, so Finn will step in and handle this as best as he can.

Finn may feel like he needs to take a deeper look at the situation since he’s a doctor and has an outside perspective.

As for Hope, she’ll also want to check out that mannequin and talk to Thomas about this. Thomas will say all the right things and reiterate that he’s using the doll purely for design purposes. Even so, Hope might find the sight of the mannequin disturbing.

Thomas will eventually enjoy an evening alone with the Hope doll. He’ll believe the mannequin’s real as he has a private dinner date with it, which will give the doll another chance to deliver dark orders.

Thomas has already been instructed to kill Liam, so the Hope mannequin may offer a murder reminder and throw in some other sinister plans, too.

Over with Paris Buckingham (Diamond White), she’ll push for honesty from her sister. Paris will want the real scoop on Zoe Buckingham’s (Kiara Barnes) relationship with Carter Walton (Lawrence Saint-Victor).

Paris may get the feeling that things are a little off – and she’ll probably suspect Zoe’s feelings for Zende Forrester-Dominguez (Delon de Metz) are the reason why.

Zende will have a bouquet of flowers for someone in the week ahead, but will Paris or Zoe be the intended recipient? Regardless, Zoe and Zende will finally face their feelings for each other in the coming episodes, though things will remain complicated.

The Bold and the Beautiful spoilers say someone will pop the question soon, so who will get down on one knee? Zoe has made it clear she doesn’t want to rush with Carter, but a proposal is still possible since he’s fallen so hard.

There’s also Thomas and his doll fixation to consider. Thomas could easily propose to the mannequin during his dinner date night.

However, there have also been some B&B hints about an engagement being on the horizon for Flo Fulton (Katrina Bowden) and Wyatt Spencer (Darin Brooks). Whatever the case, a marriage proposal is indeed on the way – and so is a startling interruption.

As for Wyatt, he’ll do whatever he can to secure another chance for Quinn Forrester (Rena Sofer). Wyatt will fight hard with Eric Forrester (John McCook), who’ll be too hurt and wary to reunite with Quinn.

Still, Wyatt will score some praise for trying to help his mom. Eric will listen to Wyatt and respect his efforts to support Quinn, so this won’t be a tense exchange.

There’ll certainly be major conflict during the week of November 16-20 though! That’s when Quinn and Shauna Fulton’s (Denise Richards) faceoff will spiral out of control, so look for Wyatt and Flo to get stuck in the middle.

Back with Zende and Zoe, they’ll have some scenes that are rather bittersweet. It’s possible Zoe and Zende will decide not to act on their feelings after they finally come out with them.

It’s also possible Zende and Zoe will decide to be together knowing how much this will hurt Carter. Either way, this is a messy situation that’s going to result in heartbreak.

Over with Thomas, he’ll have a blissful reunion with his boy. Thomas will spend some time with Douglas Forrester (Henry Joseph Samiri), but this could expose just how far Thomas is pulling away from reality.

Will Douglas notice a change in his dad and blab to Mommy Hope as well as Liam?

Time will tell, but the next two weeks will definitely be packed with action. We’ll fill you in as other B&B news and updates emerge.