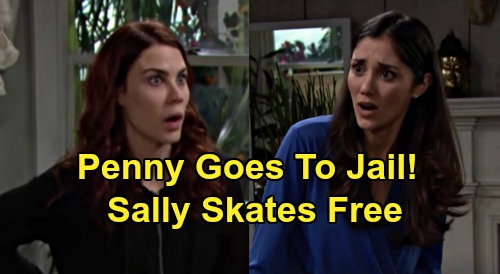 The Bold and the Beautiful spoilers tease that Penny Escobar’s (Monica Ruiz) act, in hitting Flo Fulton (Katrina Bowden) over the head, is unquestionably criminal. So, an arrest is likely to follow in the near future.

Sally Spectra (Courtney Hope) and the audience was stunned by the doctor’s actions. Sure, Penny was worked up. But to actually knock Flo unconscious was incredible.

Hope’s character could temporarily skate free if Penny leaves town and is captured later. But plenty of plot will need to play out in the meantime.

Penny and Sally were revealed as having been friends. The audience gained that information while simultaneously learning that Sally wasn’t actually dying.

The dialogue exchange between Hope and Ruiz was delivered with zest, as this storyline turned on its head. The episode-ender was a stunner, as it completely transformed the trajectory of what seemed to be developing. At the same time it also enabled the potential for Hope to remain part of the cast indefinitely, rather than be written out due to Sally’s presumed, imminent demise.

Penny wasn’t thinking clearly when she agreed to use the power of her medical license to back Sally’s false health condition claim. The proposed trade-off involved a pure promise that Sally would, at an undetermined point, facilitate Penny’s entrance into the world of fashion design.

This agreement was amoral under any circumstances. But if Penny was determined to advance her career goals in that manner, then she should have required Sally to at least provide introductions at Forrester Creations before the health ruse was cemented.

Of course, Sally should have never thought of such a devious ploy, or put it into action. As for Penny, she broke all professional ethics by backing Sally’s scheme and then violated her oath to heal by violently attacking Flo with a candlestick in Wyatt Spencer’s (Darin Brooks) living room.

If Penny hopes to stay out of jail she’ll need to either go into hiding, or leave Los Angeles, California. During that assumed time of exile, Sally would be safe.

Of course, this presumes that Penny and Sally would have gotten Flo out of the living room before Wyatt saw that scene. If so, Flo would become a threat whenever she wakes up, which could be stretched through a prolonged period of unconsciousness or coma.