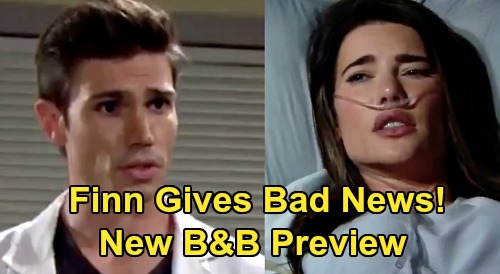 The Bold and the Beautiful (B&B) spoilers tease that a hot new promo has surfaced, and it sheds some more light on the extent of Steffy Forrester’s (Jacqueline MacInnes Wood) injuries and the uphill battle she’s going to face as a result of her motorcycle accident.

As B&B viewers know, Steffy violently collided with Bill Spencer’s (Don Diamont) car and she was thrown from her motorcycle. The good news is that Steffy will regain consciousness, but she’ll quickly realize that something is very wrong.

Steffy then asks what happened as she tries to get her wits about her. We know from B&B spoilers that Steffy is going to be in a tremendous amount of pain going forward, and she looks pretty uncomfortable in the promo, so it appears she’ll wake right up to the pain.

Steffy’s doctor and soon-to-be new love interest Dr. John “Finn” Finnegan (Tanner Novlan) makes an appearance in the new promo as well, explaining that beyond the contusions, Steffy has sprained her back and fractured some ribs.

Steffy tries to take in this news, looking like she’s in real agony. And while B&B spoilers say that Steffy will get to go home by week’s end, she’ll remain in pain that she heroically tries to push through without pain meds.

The new B&B promo also addresses the major conflict between Ridge and Bill. Of course, things were already totally strained between the men, ever since Ridge saw the video footage of Bill and Brooke Forrester (Katherine Kelly Lang) kissing.

But now Bill’s actions have nearly cost Steffy her life, and regardless of whether Bill is legally found to be at fault for the accident, he’s going to be at fault in Ridge’s mind for sure.

“You plowed your car into my daughter’s motorcycle?” Ridge angrily asks Bill in the promo. Bill then protests, saying that it wasn’t like that, and that it was simply a terrible accident.

But Ridge continues on, berating Bill, telling him, “That’s who you are – you destroy lives.” B&B spoilers say that Bill will deny wanting to hurt Steffy, and in fact he’ll say that he cares deeply for Steffy. Of course, Ridge won’t be interested in Bill’s feelings – he’ll just know that because of Bill, Steffy could have been killed.

Finally, the promo shows Bill saying that he needs to see Steffy, but Ridge insists that Bill is going to stay away from his daughter. It will be interesting to see exactly how Steffy does react to Bill once she finally does get a chance to speak with him.

Something tells us that Steffy probably won’t blame Bill for something that was just an accident, while Ridge bitterly holds onto his grudge.

That does it for the new B&B promo. We’ll keep you updated as more B&B news comes in. Don’t forget to keep CDL at the ready so you don’t miss any of the latest Bold and the Beautiful spoilers or news, and be sure to check out our daily B&B recaps as well.