The Bold and the Beautiful Spoilers: Quinn Goes Medieval On Brooke – Gets Alcoholic Rival Back On The Booze

BY hellodrdavis on January 29, 2020 | Comments: one comment
Related : Soap Opera, Spoiler, Television, The Bold and the Beautiful 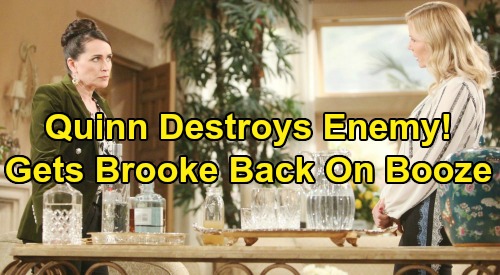 The Bold and the Beautiful (B&B) spoilers tease that Quinn Forrester (Rena Sofer) will soon embrace her dark side once again. As B&B viewers know, Quinn has been seriously peeved with Brooke Forrester (Katherine Kelly Lang) lately. Brooke really crossed a line when she barged into Quinn’s home with Eric Forrester (John McCook) and started throwing her weight around and demanding that Eric throw out both Shauna Fulton (Denise Richards) and Quinn.

Well, according to B&B spoilers, Quinn will soon go beyond the point of no return when it comes to Brooke. But what exactly could she do to Brooke? Obviously, she wants to bring Brooke down a notch, and she even stated to Shauna that she’d end Brooke, which sounds awfully ominous. So, what does Quinn have in mind?

Well, on the episode airing on Tuesday, January 28, Eric seemed to inadvertently give Quinn a devious idea. He and Quinn were arguing, and he happened to mention that he was very concerned about Brooke right now, because her current behavior reminded him of when Brooke was drinking too much, Eric said that he’d hate to see her go to that dark place again.

At that point, a look flashed across Quinn’s face, and when Eric left the room, Quinn stared for a moment at the liquor bottles sitting in the living room.

We should note, too, that this isn’t the first time in recent days that Brooke’s past alcohol abuse has come up. And all of this probably means that Quinn going to the point of no return means that she might try to get Brooke hooked on alcohol again.

Now exactly how Quinn would go about getting Brooke drinking again remains to be seen. It’s not like she can overtly force Brooke to drink and get her addicted to alcohol…or could she somehow?

What if Quinn were to somehow slip alcohol into Brooke’s drink, in order to get her craving it again? Stranger things have happened, and Quinn is certainly devious enough to do something like this.

We’ll see what happens, but if Brooke were to start drinking heavily again, it would open up a world of problems for her, which might be exactly what Quinn will want.

After all, if Brooke becomes consumed with drinking, then she’ll probably be less likely to effectively wage attacks on Quinn in the future…and it could be the final death blow to Brooke’s marriage to Ridge Forrester (Thorsten Kaye).

Do you think that Quinn will try to get Brooke drinking again? Stay tuned to B&B and don’t forget to check CDL often for the latest Bold and the Beautiful spoilers, updates, and news.