BY Heather Hughes on January 22, 2020 | Comments: one comment
Related : Soap Opera, Spoiler, Television, The Bold and the Beautiful 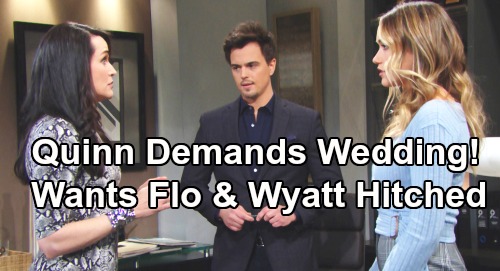 The Bold and the Beautiful (B&B) spoilers tease that Quinn Forrester (Rena Sofer) won’t have much sympathy for Sally Spectra (Courtney Hope). Sally will be dealing with a lot thanks to her looming diagnosis, but Quinn won’t be in the loop on that. She’ll just think Sally needs to suck it up and let Wyatt Spencer (Darin Brooks) go.

Quinn’s priority will be her son and his happiness, which she believes he can have with “Flo” Fulton (Katrina Bowden). In fact, Quinn won’t see why Flo and Wyatt should wait to start their life together.

Quinn will make a shocking suggestion – one that would kick off Wyatt’s future with Flo immediately and show Sally exactly where he stands.

The Bold and the Beautiful spoilers say Quinn will push for a fast wedding. She’ll think Wyatt should marry Flo ASAP and put all this Sally business to rest. Of course, Wyatt will object. He’ll point out that technically, he’s still engaged to Sally since she hasn’t accepted the breakup yet.

Quinn will probably counter that this will send Sally a clear message. If Wyatt makes Flo his bride quickly, Sally will have no choice but to move on.

Wyatt loves Flo and indeed wants to build a life with her, but he may not see the hurry. That’s especially true since this would really twist the knife for Sally.

As much as Wyatt adores Flo, he still cares about Sally, too. B&B fans can expect this situation to grow increasingly complicated.

Sally’s illness will leave her distraught, so she’ll blow up at Wyatt even more. She’ll push Wyatt away as he tries to reach out, but Wyatt will assume he’s just hurt Sally that deeply.

Wyatt won’t realize there’s another heartbreaking element in all this – at least not at first. Katie Logan (Heather Tom) will be the only one Sally confides in initially, but Wyatt’s bound to get the full picture down the road. The Bold and the Beautiful spoilers hint that emotions will get messy!

In the meantime, Quinn will keep trying to pressure Wyatt into this quickie wedding. She’ll hope Wyatt will pop the question to Flo soon, but Sally’s issues could present a huge hurdle.