BY hellodrdavis on January 22, 2020 | Comments: one comment
Related : Soap Opera, Spoiler, Television, The Bold and the Beautiful 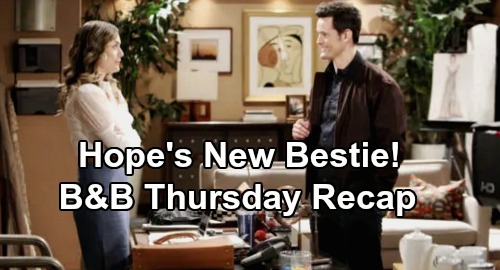 The Bold and the Beautiful spoilers for Thursday recap, January 23, tease that the action is really heating up on the CBS soap. But before we get to that, we have a quick programming note. As you probably know, B&B did not air on Tuesday and Wednesday due to the impeachment hearings. Assuming that CBS gets back to regular broadcasting on Thursday, we have the scoop about what you can expect right here.

Steffy Is Tormented By Her Guilt

First off, Steffy Forrester (Jacqueline MacInnes Wood) will spend some time together at the beach with Liam Spencer (Scott Clifton) and Kelly Spencer (Zoe Pennington). It looks like they’ll have a nice family outing, which will be great to see, since Liam hasn’t spent much time with Kelly in recent weeks. But after their good family time ends, and it’s time for Liam to head back to the office, a sore subject will come up – their recent kiss.

As B&B viewers know, Steffy kissed Liam out on the cliff, and it happened to be right at the very moment that Hope Logan (Annika Noelle) came along. Of course, that was no accident – it was completely orchestrated by Thomas Forrester (Matthew Atkinson) with a big assist from Steffy, who kissed Liam right on cue when Thomas signaled her.

Well, B&B spoilers say that Steffy will be feeling awfully guilty about the kiss, and in particular about how it all came about. She’ll feel that she should tell Liam about how and why the kiss happened, and it looks like she’ll try to get the words out, but Liam will reassure her that he doesn’t blame her for the kiss or for the disastrous scene that followed with Hope.

Liam will ultimately leave for the office, but Steffy’s guilt will be almost too much for her to bear. According to B&B spoilers, she’ll decide that she needs to come clean with Liam about the whole thing, and she’ll resign herself to doing so the next time that she and Liam speak.

Meanwhile, over at Flo Fulton’s (Katrina Bowden) apartment, she’ll be surprised to find Sally Spectra (Courtney Hope) at her door. As B&B viewers will remember, Sally has just faced the dreaded “breakup conversation” with Wyatt Spencer (Darin Brooks). Wyatt told Sally that he wanted to end their engagement and their relationship, so he could try to make things work again with Flo.

Well, that didn’t sit well with Sally, and so she’ll have a few things to get straight with Flo. Exactly what she says to Flo remains to be seen, but she’ll likely tell her that she’s not going to let Wyatt go without a fight, and that she’s not going to let Flo just swoop in and take her fiancé from her. However, Flo will have a big question for Sally – she’ll want to know why Sally wants to be with someone who no longer wants her.

Aside from Sally’s confrontation of Flo, it looks like something else will happen while the two women are going back and forth about Wyatt. According to B&B spoilers, Sally will start shaking again, just like she did at Forrester Creations a while back when she was trying to design and when she was talking with Steffy and Ridge Forrester (Thorsten Kaye).

It appears that Flo will wind up quite concerned about Sally, and her new shaking episode might just be what gets Sally to head to the doctor for a checkup. She definitely needs medical attention for her troublesome symptoms, and ongoing B&B spoilers indicate that she will eventually seek medical attention to find out exactly what’s wrong with her. It looks like it could be pretty serious.

Next, Wyatt will seek out his mom for some words of advice. He’ll pay Quinn Forrester (Rena Sofer) a visit and lament about his problems. He’ll be worried about the ongoing situation with Sally, since she doesn’t seem to be accepting the fact that their relationship is over. Wyatt will probably note that he couldn’t have been clearer with Sally about his intention to break up with her, but that Sally just didn’t accept it and basically told him “no” to the breakup.

We’ll see what Quinn says about all of this, but it’s pretty safe to say that she’ll be thrilled that Wyatt wants to dump Sally and get back together with Flo. As B&B viewers know, Quinn has consistently been on “team Flo” and adamantly against Wyatt’s relationship with Sally. This should make Quinn happy, and she’ll surely encourage her son to start planning his new life with Flo.

Finally, Thomas will be feeling victorious. He’ll encounter Hope, and she’ll still be feeling upset over the whole Steffy/Liam kiss that she witnessed at the cliff house. Although she may at first feel reluctant to open up to Thomas of all people, it looks like she’ll really need someone to vent to, and Thomas will be there for her.

The Bold and the Beautiful spoilers say that Hope will open up to Thomas about what she witnessed on the cliff and how she’s devastated over her breakup with Liam. Of course, Thomas will need to pretend like he’s hearing all of this for the first time and that he knows nothing about what happened on the cliff. B&B viewers know that he’s well-aware of what happened because he was there, hiding and watching the whole thing unfold.

At any rate, Thomas will let Hope vent and he’ll play the role of good friend and confidante – the schemer is becoming Hope’s new bestie! And secretly, he’ll be doing a little victory dance, since this is exactly what he wanted. He’s been trying to drive a wedge between Hope and Liam for months, and now he’s done it, and he’s able to swoop in and be there for Hope in her time of need.