The Bold and the Beautiful Spoilers: Wednesday, January 22 – Sally Gets Sick During Flo Fight – Steffy Tries To Spill Kiss Truth

BY Heather Hughes on January 22, 2020 | Comments: one comment
Related : Soap Opera, Spoiler, Television, The Bold and the Beautiful 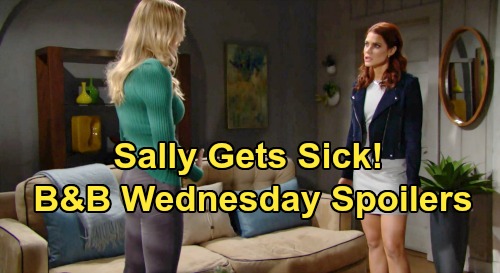 After they bond at the beach, Liam will head back to Steffy’s place and get ready for work. He’ll note that Kelly’s fast asleep, and Steffy will think it’s because she knows her daddy’s there.

Liam and Steffy will discuss how Kelly’s a daddy’s girl, which will lead to Steffy’s confession. She’ll admit that it’s been nice having Liam at the house more these last few days. Steffy will reflect on how Liam could be there when Kelly woke up. They’ve been making breakfast together and just enjoying their “Steam” family unit.

Liam will point out that it took two people to lock lips. He won’t blame Steffy for what happened, but Steffy will contend that maybe he should. She’ll add that Hope should as well, but Liam won’t understand.

Steffy will eventually blurt out that she did something knowing the enormous repercussions it would have. She’ll tell Liam there’s something he needs to know about that kiss.

The Bold and the Beautiful spoilers say Steffy will plan to spill how she knew Hope would witness it. However, that plan will change thanks to Thomas Forrester (Matthew Atkinson) later this week.

Until then, Thomas will revel in being able to comfort Hope. She’ll complain about Liam’s kiss with Steffy before falling into Thomas’ arms. It sounds like Thomas will really be on cloud nine!

Over with “Flo” Fulton (Katrina Bowden), she’ll get a visit from an angry Sally Spectra (Courtney Hope). Sally will show up at Flo’s apartment to confront her about trying to steal Wyatt Spencer (Darin Brooks) back.

Flo will ask why Sally’s fighting for a man who doesn’t want to be with her. She’ll think it’s time for Sally to let go. Sally, on the other hand, will think Wyatt needs to remember why they fell in love.

She’ll refuse to lose Wyatt on top of everything else that’s going on in her life. Sally will suggest Wyatt just needs a few days to get his head on straight.

Unfortunately, Sally will exhibit some troubling symptoms while she’s sparring with Flo. Sally will leave Flo wondering if she’s all right – and Sally will undoubtedly wonder that herself. She’ll still be shaky and unsettled, so Sally will a diagnosis from her doctor in the coming episodes.

Meanwhile, B&B spoilers say Wyatt will fret over his attempted breakup. He’ll fill Quinn in on how he tried to call off his engagement and met some resistance from Sally.

Quinn will be glad Wyatt’s following his heart, but that won’t stop Wyatt from worrying about Sally and hoping she can accept his decision.