The Bold and the Beautiful Spoilers: Quinn Takes Care Of Brooke Once And For All – This Is War – Weekly Preview 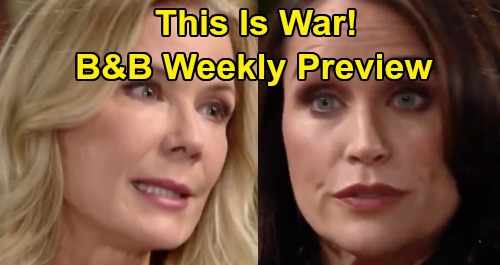 The Bold and the Beautiful (B&B) spoilers preview for the week of January 20 to January 24 teases that a major war has been declared. As B&B viewers know, Brooke Forrester (Katherine Kelly Lang) recently marched straight into the Forrester mansion and started throwing around some serious demands of Eric Forrester (John McCook). And one of those demands was that Eric divorce Quinn Forrester (Rena Sofer) immediately and throw her out on the street.

Of course, this came after Brooke and Quinn had a serious physical altercation in the Forrester living room. Brooke had just made all sorts of accusations against Shauna Fulton (Denise Richards) and Quinn, and she had just slapped Shauna.

That led Quinn to slap Brooke back twice as hard and warn her not to start something she couldn’t finish.

So now we have to ask – who’s going to win this fight? Brooke started the whole thing, but will she really be able to take on Quinn? After all, Quinn is a scrapper, and she fights to win.

Never mind that Eric warned her to be the bigger person and stay away from Brooke, because Quinn perceives herself to be (and is) under attack by Brooke, and when she’s under attack, watch out!

So far, Brooke has talked big, and she’s declared war several times now. But what’s she really going to do to Quinn at this point? She can’t just keep telling Eric to divorce Quinn, because that’s clearly not going to work.

Brooke would have to do something seriously awful to Quinn, and we’re just not sure that it’s in Brooke’s nature to do so. Is she even devious enough to pull off a Quinn-like move against Quinn?

Chances are, it’s going to be Quinn who really plays dirty – and let’s face it, she could do quite a bit of damage to Brooke because she has two things going for her. First, there’s the Shauna factor.

Shauna could really go after Ridge Forrester (Thorsten Kaye) with everything she’s got. She’s been largely holding back up until now, but Quinn’s definitely got an ally there.

And then there’s another factor that Brooke doesn’t seem to have even considered at this point, and that’s Thomas Forrester (Matthew Atkinson). According to B&B spoilers, Thomas will soon make an overture to Quinn about teaming up to destroy Brooke.

It will be interesting to see if Quinn takes Thomas up on his offer – after all, Quinn is pretty effective in working on her own.

Yet, she’ll probably feel like she needs a devious ally, and Thomas could be her man on that front. It seems like Quinn already has an advantage against Brooke going in, but if she combines forces with Thomas, then we could definitely see a major Brooke take down, and Thomas could help Quinn deflect attention from herself in doing so.

So will Quinn take care of Brooke once and for all? It remains to be seen what the two ladies will end up doing as they duke it out, but it seems like Quinn probably has the advantage, especially if she gets Thomas on her side.

What do you think? Are you Team Brooke or Team Quinn? Stay tuned to B&B and don’t forget to check CDL often for the latest Bold and the Beautiful spoilers, updates, and news.