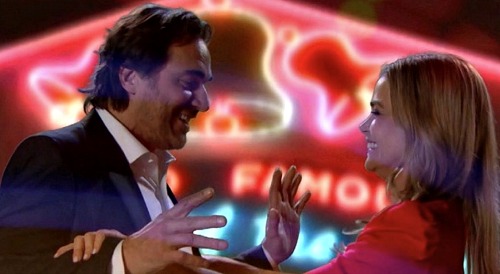 The Bold and the Beautiful (B&B) spoilers tease that Ridge Forrester (Thorsten Kaye) could get some shocking news in the coming days. As B&B viewers will remember, shortly before the show’s hiatus, Ridge walked out on Brooke Forrester (Katherine Kelly Lang).

This occurred after Ridge and the rest of the family saw video footage of Brooke kissing Bill Spencer (Don Diamont). Ridge was furious enough to throw things around and tell Brooke that they were done, so it was pretty serious.

Viewers didn’t see Ridge again until he showed up at Flo Fulton’s (Katrina Bowden) apartment to see Shauna Fulton (Denise Richards), who was packing to go back to Vegas.

Ridge ultimately hopped on the Forrester jet with Shauna and went to Vegas to get away from all the Brooke drama. But we should point out that it’s completely unknown what Ridge did before he showed up at Shauna’s apartment.

Could Ridge have been furious enough with Brooke that he stopped by Carter Walton’s (Lawrence Saint-Victor) place and instructed Carter to file those divorce papers that he and Brooke signed a while back?

We haven’t forgotten that Ridge last had possession of those papers, and what better time than right after learning about Brooke’s betrayal to file them? Carter could certainly have filed the papers with the court the very next day, right as Ridge and Shauna were getting settled in Vegas.

And if that’s the case, then there’s another possibility here. As B&B viewers will remember, Ridge and Shauna ended up going out for a wild night on the Vegas strip during his time there.

A quick montage at the end of an episode made it clear that Ridge and Shauna did a LOT of drinking during their night out – so much that Ridge was in a blackout state. When Ridge woke up the next morning at the Forrester mansion with Brooke, he didn’t remember a thing about what happened that night.

Well, B&B viewers saw something brief but very significant during the montage showing Ridge and Shauna out partying – they were shown briefly standing in front of a wedding chapel.

And Denise Richards has since stated that her character Shauna got married on the show. Now, if Ridge and Shauna went through with an official ceremony, it wouldn’t be legal if Ridge was still married to Brooke.

But if Ridge actually had Carter file those signed divorce papers from his marriage with Brooke, there’s the very real possibility that his wedding to Shauna resulted in a bona fide marriage between the two.

And at this point, Shauna wouldn’t realize that the marriage was binding because she still thinks that Ridge is married to Brooke. And of course, Ridge doesn’t even know that he and Shauna visited a wedding chapel, given his state of inebriation that night.

But once Shauna tells Ridge about their Vegas wedding, Ridge might come to a big realization – that he’s actually could be legally divorced from Brooke and married to Shauna!

It might take a quick call to Carter to verify that Carter filed the divorce papers, but if Carter did file them, then Ridge could have quite a situation on his hands, as could Brooke and Shauna.

And we have to think that Shauna isn’t going to just let the whole thing go. Chances are, her bestie Quinn Forrester (Rena Sofer) will find out about the whole story and she’ll surely encourage Shauna to stake her claim as Mrs. Ridge Forrester.

Quinn would absolutely love being able to lord Shauna’s marriage to Ridge over Brooke, and who knows – Shauna might decide that now that she’s married to Ridge, then she should fight for him.

We’ll see what happens here, but we think that there’s a good chance that Ridge is going to have a startling realization once he starts thinking a little more clearly and remembers all of his moves both before getting to Vegas and after.

Do you expect to see Shauna stake her claim as Mrs. Ridge Forrester? Stay tuned to the CBS soap, and be sure to keep CDL bookmarked so you don’t miss any our B&B spoilers and news. And be sure to check out our daily B&B recaps, too!