The Bold and the Beautiful Spoilers: Sally Falls for Wyatt’s Pretend Love Plot – Scammer Gets Scammed? 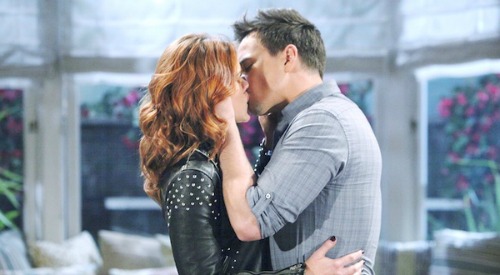 The Bold and the Beautiful (B&B) spoilers tease that Flo Fulton (Katrina Bowden) will do everything in her power to find the truth. Flo is already battling concerns about Sally Spectra’s (Courtney Hope) troubling behavior. Sally’s decision to emotionally blackmail Wyatt Spencer (Darin Brooks) certainly left Flo uneasy, but Dr. Penny Escobar (Monica Ruiz) has provided some red flags, too.

Flo can tell that Dr. Escobar’s nervous and could perhaps be leaving out a crucial part of the story. When you throw in the fashion designs that Flo saw, she has several reasons to keep pursuing this.

Flo will want to satisfy her curiosity and uncover anything shady. Since Flo clearly doesn’t trust Sally, she’ll be on a mission to protect Wyatt – who’s at the center of all this drama.

B&B fans know Sally refuses to stand by and let Flo win once again. Although Sally will keep fighting for Wyatt’s love, she’s about to hit some huge snags. Flo will throw Sally out of Wyatt’s place and eventually sneak a peek at some files on Dr. Escobar’s computer. As Flo revs up her detective work, will she score the proof she needs?

Flo will indeed look at Sally’s medical records, so she could find evidence that something fishy is going on. Will Sally’s terminal illness even be in the system? Flo could easily confront Dr. Escobar afterward and score a confession. Penny honestly seems like she could crack any day now, so it wouldn’t be too hard once the doc was cornered with proof.

Proof is indeed what Flo needs to make Wyatt believe this wild tale and see Sally’s true colors. Once Wyatt discovers Sally’s horrible deception, what will he do next? The Bold and the Beautiful could let Wyatt simply confront Sally, but that seems like a pretty lackluster ending to this hot plot.

A better option would be giving Sally a taste of her own medicine! Sally could become the victim of Wyatt and Flo’s almost-as-twisted scheme. Will Wyatt make Sally believe her plan worked?

Wyatt could make a big show about dumping Flo in front of Sally. Maybe Wyatt could carry out a charade and make Sally think her dream’s coming true.

Wyatt might let Sally believe she’s going to have it all and then bring her world crashing down! Will Sally the scammer get scammed as payback? Will Wyatt deceive Sally just like he’s been deceived?