The Bold and the Beautiful Spoilers: Sally Unhinged – Flo & Dr. Escobar In Grave Danger, Will Scammer Kill To Protect Secret?

BY hellodrdavis on March 25, 2020 | Comments: 2 comments
Related : Soap Opera, Spoiler, Television, The Bold and the Beautiful 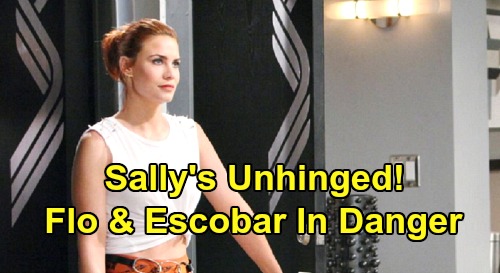 The Bold and the Beautiful (B&B) spoilers tease that Sally Spectra’s (Courtney Hope) devious plan could end up posing some big danger. As B&B viewers know, Sally has been faking her terminal diagnosis from the very beginning. As it turns out, she is friends with Dr. Penny Escobar (Monica Ruiz), who very much wants to leave medicine and break into the fashion industry at Forrester Creations.

Well, Sally told Dr. Escobar that she’d get her in at Forrester Creations if she provided a false diagnosis in front of Katie Logan (Heather Tom). Sally assumed correctly that Katie would blab about her condition to Wyatt Spencer (Darin Brooks), and that Wyatt would step in to support her through her “final days.” So far, Sally’s plan has worked pretty well, except for one critical detail…Wyatt is still madly in love with Flo Fulton (Katrina Bowden).

Sally has a plan, though. She wants to make the most of the next couple of weeks with Wyatt, so that Wyatt realizes how great they were together. Then, she plans to suddenly be “cured” with the help of Dr. Escobar and live happily ever after with Wyatt. But in order for this plan to work, a couple of things have got to happen: (1) Dr. Escobar has got to keep cooperating, and (2) Flo needs to back off.

Both of these things seem problematic for Sally. For one, Dr. Escobar already seems to want to abandon ship. Dr. Escobar is nervous about the whole thing, and she should be, since she could lose her license to practice medicine. Plus, she doesn’t think that it’s right for Sally to be faking a terminal illness and worrying everyone needlessly. It seems like Dr. Escobar could back out of this plan at any time.

And then there’s Flo, who already seems to be skeptical of Sally’s motives. When Flo came over to the beach house to check on Sally, she started to get suspicious when Sally seemed to relish the idea of keeping Flo and Wyatt apart. Of course, at this point Flo has no idea that Sally is faking her illness, but ongoing B&B spoilers indicate that Flo will take steps to figure out what might be going on.

The Bold and the Beautiful spoilers say that Flo will pay Dr. Escobar a visit and put her on the hot seat over Sally’s diagnosis, so it certainly sounds like Flo will start to have her suspicions about Sally. Of course, Dr. Escobar will then probably rush right to Sally and tell her that Flo is asking all sorts of questions.

And that could lead Sally to take some drastic action. After all, Sally is in this to win, and she’s not going to be satisfied until she’s got Wyatt for herself. Plus, it seems that there’s nothing that Sally won’t to do get her way, since she’s willing to deceive multiple people about having a terminal illness just to get Wyatt back. What if Sally becomes dangerous and she turns on Dr. Escobar or Flo?

We should also note that TPTB promised that a B&B character would die in 2020. Up until recently, it seemed that this character would be Sally, but now that we know that Sally isn’t really dying, that leads us to wonder whether Sally might actually be the person responsible for someone’s death. What if Sally decides to permanently get rid of Dr. Escobar or Flo?

If Dr. Escobar decides to come clean and/or refuses to go along with Sally any longer, then Sally could decide to eliminate her. Or, Flo could get too snoopy and start to put the pieces together, which could result in Sally deciding that she needs to be killed. It’s a terrible thought that Sally could do something like this, but she seems pretty unstable lately, so you never know.

At any rate, it seems that Dr. Escobar and Flo could wind up in serious danger. Do you think that Sally might actually kill someone to protect her plan to get Wyatt for herself? Stick with B&B and we’ll keep you informed on all the latest Bold and the Beautiful news and spoilers here at CDL.