BY Heather Hughes on March 24, 2020 | Comments: one comment
Related : Soap Opera, Spoiler, Television, The Bold and the Beautiful 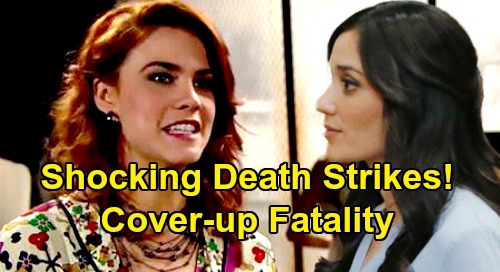 The Bold and the Beautiful (B&B) spoilers tease that Sally Spectra’s (Courtney Hope) plot is set to spiral out of control. B&B fans know Dr. Penny Escobar (Monica Ruiz) is already on the verge of cracking under the pressure. Sally has promised to jumpstart Penny’s fashion career, but will that be enough to ensure the doc keeps playing along?

Now’s a good time to look at some spring preview spoilers and compare them with ones from the January 2020 preview. You’ll notice some major differences that could indicate some scrapped plans and a total rewrite. In an earlier issue of Soap Opera Digest, Executive Producer and Head Writer Bradley Bell made promises that he hasn’t delivered on.

“We have a great story for Flo, Wyatt and Sally…something that is really going to be very touching and I look forward to seeing that unravel in 2020,” Bell said. Obviously, it’s not “very touching” for Sally to be scamming Wyatt Spencer (Darin Brooks)! As Penny pointed out, it’s downright cruel to make Wyatt and everyone else think Sally’s dying.

So either Bell was lying to preserve the surprise or perhaps the plan changed along the way. That brings us to another promise from the 2020 preview. Bell insisted that a “beloved character” would meet his or her demise this year, so many people assumed that might be Sally. Now that Sally’s admitted to faking her terminal illness, we have to wonder if that plan changed, too.

Will there still be a shocking death on B&B? There were at least some deadly hints in SOD’s spring preview, which went along with Sally’s storyline. The Bold and the Beautiful spoilers say Penny will get in over her head. Dr. Escobar will wind up far more deeply involved than she wants to be.

“Of course, everything that is done is for the sake of love, until it really does become a life-or-death situation,” Bell teased. Since Sally isn’t really dying, that seems to be an indicator that the cover-up will lead to danger. It’s tough to buy Sally committing murder to protect her secret, but she might inadvertently cause someone’s death.

If B&B still wants “beloved character” to be killed off, their options may be limited. Sally could accidentally cause her own demise or perhaps Katie Logan’s (Heather Tom) death instead. Flo Fulton (Katrina Bowden) isn’t quite a beloved character, but The Bold and the Beautiful might consider her one. However, it seems like B&B would probably want to keep all these characters around.

Poor Penny may be the most at risk since she’s new and disposable. Keep in mind that the “very touching” part of Sally’s story changed, so maybe the “beloved” part of this upcoming death changed as well. B&B could easily be planning to kill off a completely different character now. It’s easy to imagine Sally accidentally causing Penny’s fatal fall during an altercation or something along those lines.