The Bold and the Beautiful Spoilers: Sally’s Baby Is Get-Out-of-Jail-Free Card – Pregnant by Wyatt During Flo’s Hostage Ordeal? 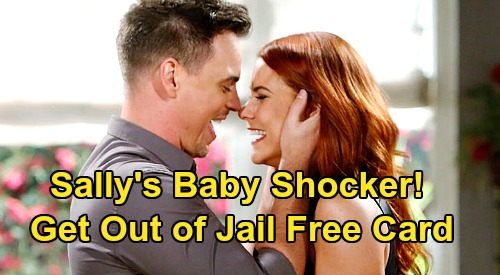 The Bold and the Beautiful (B&B) spoilers tease that Sally Spectra (Courtney Hope) is headed for heartbreak. B&B viewers call tell Sally’s plan is destined to fail. Flo Fulton (Katrina Bowden) now knows Sally is a fraud, so the truth’s going to come out.

Of course, that doesn’t mean it’ll come out right away! Dr. Penny Escobar’s (Monica Ruiz) decision to whack Flo in the head and knock her unconscious will delay the inevitable. That could give Sally time to create some curveballs – particularly if Flo’s held hostage as expected. Sally can simply make it appear as if Flo left Los Angeles on her own.

With Flo out of the picture, it should be pretty easy for Sally to do just what she wanted. Sally can pull Wyatt Spencer (Darin Brooks) closer and ultimately seduce him. Once Sally’s got Wyatt in bed again, she may think that’ll be enough to seal the deal on their reunion.

Naturally, Sally could also skip birth control and try to lock in a baby insurance policy. Could a kid with Wyatt be what saves Sally in the end? Even if it doesn’t save Sally from losing Wyatt, it might save her from a prison sentence. The Bold and the Beautiful could have a baby twist in mind to change the game.

If Flo gets locked up by Sally and Penny, that means she’ll ultimately escape or be freed by someone. It also means Flo can show up to finally expose Sally. Flo can rant about Sally’s fake terminal illness plot and inform Wyatt that Penny attacked her.

Flo can bring Wyatt up to speed on her time in captivity and completely turn him against Sally. Just before Wyatt and Flo are set to call the cops, Sally might inform them that they can’t…because she’s pregnant!

Since Flo has proven that she’s Little Miss Sacrifice, it’s easy to imagine her refusing to press charges for Wyatt’s sake. That’d be Wyatt’s child, so Flo might agree that it’s best for Sally to stay out of the slammer and get the proper care before the birth.