BY hellodrdavis on February 10, 2020 | Comments: 3 comments
Related : Soap Opera, Spoiler, Television, The Bold and the Beautiful 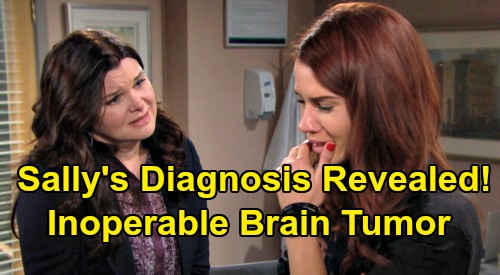 The Bold and the Beautiful (B&B) spoilers tease that Sally Spectra (Courtney Hope) is facing a terrible fate and her prognosis is awful. As B&B viewers know, she was just given her diagnosis by Dr. Escobar (Monica Ruiz), and she and Katie Logan (Heather Tom) had a big reaction to the news. However, B&B viewers weren’t privy to the specific diagnosis that Sally received.

It was clear, though, that Sally doesn’t have much time to live, and in the latest B&B promo, she references having about a month left of her life. This is tragic news and Sally was clearly stunned by the diagnosis.

Now, she wants to handle everything on her own and not share the details with Wyatt Spencer (Darin Brooks) or anyone else. It’s just a sad story all the way around.

But what does Sally actually have, and why were viewers not let in on the diagnosis? Well, viewers will probably hear the diagnosis soon, most likely either when Katie spills the beans about Sally’s condition to Bill Spencer (Don Diamont) or when she tells Wyatt about it, both of which she’ll do soon.

Or perhaps we’ll hear the words come from Sally, as she finally talks to Wyatt about her diagnosis.

At this point, given that Sally’s condition is terminal and apparently rapidly progressing, it’s likely that she has cancer. And given her symptoms, it could be a rapidly progressing brain tumor. That would certainly explain the shaking, the dizziness, and the cognitive impairments she’s experienced.

And actually, even back when Sally mistakenly called Wyatt by Liam Spencer’s (Scott Clifton) name, she was likely experiencing cognitive confusion then. Of course, once Wyatt realizes this, that’s going to make him feel even worse than he already does about his breakup with Sally.

But back to Sally’s likely diagnosis, a cancerous brain tumor would make sense here, since we know that Sally’s condition can’t be treated, and brain tumors are often inoperable based on where they are located in the brain. And cancer grows very quickly, which would explain her short amount of time to live.

At any rate, hopefully after Sally decides to (or is forced to) accept help and support from her friends and loved ones, she’ll be better able to cope with the illness that she’s got. Whatever it ends up being, she’ll need people rallying around her to help her as she faces her greatest struggle.

What do you think Sally’s diagnosis is? Stay tuned to B&B and don’t forget to check CDL often for the latest Bold and the Beautiful spoilers, updates, and news.