The Bold and the Beautiful Spoilers: Steffy Doesn’t Recognize Hope & Brooke As Family – But Are The Logans Friends or Enemies? 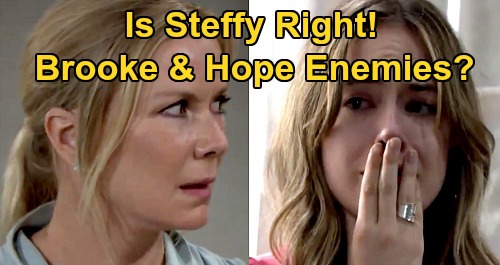 The Bold and the Beautiful spoilers document that Steffy Forrester (Jacqueline MacInnes Wood) isn’t currently capable of recognizing reality. She’s living in a drug induced world due to the intensity of her multilevel pain.

Liam Spencer (Scott Clifton) discovered pills that were hidden in the sofa at the cliff house. He followed Dr. John Finnegan’s (Tanner Novlan) more measured assessment when telling Steffy that she needs help.

Bold And The Beautiful Spoilers – Turning B&B On Its Head

Executive producer Bradley Bell teased the current storyline in the summer. He expressed his confidence in giving Wood a topical arc that he knew she’d handle with creative dexterity.

Seeing Wood’s dynamic character loose control of herself has been transfixing. Sure, Steffy’s endured relationship pain, specifically where Liam is concerned in recent years.

As Steffy herself told Hope Spencer (Annika Noelle), there was the traumatic realization that the child she adopted and named Phoebe Forrester (Madeline Valdez and River Davidson), in honor of her deceased sister, was ripped from her world. But the current issue Steffy is dealing with is fresh.

Liam is Steffy’s family, even though she lashed out at him for abandoning her and Kelly Spencer (Avalon and Colette Gray). Hope is Steffy’s family, even though Steffy believes that she stole Liam from her like Brooke Logan (Katherine Kelly Lang) took Ridge Forrester (Thorsten Kaye) from her mother, Taylor Hayes (Hunter Tylo), in daytime days gone by.

The Forrester’s and the Logan’s have battled each other on this soap for decades. But there have been moments, like this one will eventually be, where they stand together in support of their blended family.

Steffy will come to believe that everyone is against her. Ridge’s perceived stance will be a breaking point, as Wood’s chemically affected character will sense that all is lost.

In reality, Steffy has only taken two prescribed bottles of pain pills during the course of nearly two months. Vincent Walker’s (Joe Lo Cicero) gift to her just arrived, with this being the first response to whatever drug was foolishly sent.

Starting from an illogical base, Steffy will act on pure emotion and attempt to flee what she sees as a gang of enemies. The writing staff Bell heads is right to think that applause is being offered by the audience as this happens because great soap sells.