The Bold and the Beautiful Spoilers: Steffy Fans Want Leo Back As New Love Interest – Could Sam Myerson Return To B&B?

BY hellodrdavis on February 3, 2020 | Comments: 2 comments
Related : Soap Opera, Spoiler, Television, The Bold and the Beautiful 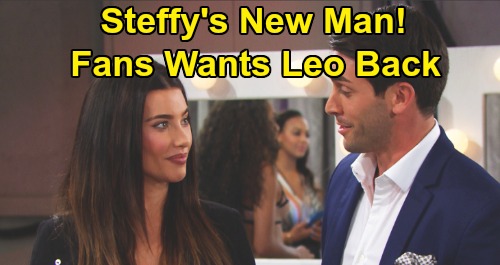 The Bold and the Beautiful (B&B) spoilers has some great news to pass on about Sam Myerson, who played the role of Leo on B&B last year. Although Leo’s time on the show was brief, he was an important character for scores of Steffy Forrester (Jacqueline MacInnes Wood) fans out there.

As you might remember, Leo was a buyer who came to Forrester Creations after Steffy’s breakup with Liam Spencer (Scott Clifton) and promptly asked Steffy out on a date.

Sadly, Steffy turned down the date, much to the surprise of fans, many of whom would have loved to see Leo stay on at B&B as Steffy’s new love interest. There’s definitely a contingent of fans out there who want to see Steffy with a hot new guy, rather than continually gravitating to and from Liam…or to any Spencer man.

Steffy’s had relationships with both Liam and Wyatt Spencer (Darin Brooks), and she had an affair with Bill Spencer (Don Diamont). And while a lot of time has passed since Leo made his appearance on the show, there are fans who have been following him on social media and hoping that he’ll come back to B&B to whisk Steffy off her feet.

Well, so far there’s no indication that Sam Myerson is headed back to B&B, which is frustrating for a lot of fans. But he has been busy with other things. In fact, he’s currently appearing in a fairly prominent role in the new Meghan Trainor music video. The video is for a song called, “Nice To Meet Ya” and features Nicki Minaj.

In the video, Sam plays the part of a business executive and appears in several scenes with Meghan Trainor. He looks pretty much like Leo did, wearing a business suit and looking very good. At one point he holds Nicki Minaj’s business card and looks puzzled.

Sam posted about his role in the video on Instagram. He shared some stills of himself from the video, along with the following caption: “Take notice, gentlemen…The women are taking over…Was such an honor to be a part of the new @meghan_trainor music video.”

Sam’s followers were thrilled with the post, and he’s been flooded with replies and comments about his pictures and the video, which you can watch below. One follower simply said: “Killed it.” And another commented: “Nicki, I love her, the queen…l was looking for ya, u look so good in the video.” Sam even replied a big thank you to that fan.

We’ll see what the future holds for Sam Myerson, but one thing’s for sure – there’s a large number of B&B viewers who are still holding out hope that he’ll somehow return to the show as Leo and get another shot to ask Steffy out on a date.

Let’s face it – Steffy could really benefit from going out and having some fun with a hot new guy and getting her mind off the seemingly endless love triangle with Hope Logan (Annika Noelle) and Liam.

Do you think we’ll ever see Leo return to whisk Steffy off her feet? Stay tuned to B&B and don’t forget to check CDL often for the latest Bold and the Beautiful spoilers, updates, and news.