The Bold and the Beautiful Spoilers: Steffy Gets Pregnant After Liam Lovemaking – New ‘Steam’ Family Baby? 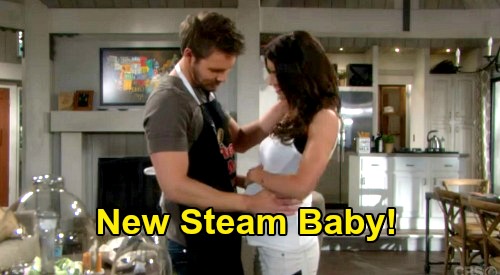 The Bold and the Beautiful (B&B) spoilers tease that Steffy Forrester (Jacqueline MacInnes Wood) could get the “Steam” reunion she wants. She certainly seems to be on the verge of it now that Hope Logan (Annika Noelle) is out of the picture. Hope walked away from Liam Spencer (Scott Clifton) after he reciprocated Steffy’s kiss, so all signs are pointing to a “Steam” reboot.

During the week of January 20-24, Thomas Forrester (Matthew Atkinson) will try to make sure Steffy doesn’t blow this. Steffy will be tempted to tell Liam about Thomas nudging her into the lip lock.

Liam marveled at how Hope appeared at the worst possible moment, but Steffy knows it was no coincidence. Despite the rising guilt, it looks like Thomas will convince Steffy to keep quiet.

Of course, that could mean a clear path to Steffy and Liam officially getting back together. Liam admitted he wanted to kiss Steffy, so we all know he wants to do more than that. If everything keeps going well, Liam and Steffy are bound to make love. That’s when things could start to get messy – or at least messier than they already are!

At that point, Liam may learn Steffy’s been keeping secrets with Thomas. Between her deception and the fact that person he despises most was involved, Liam might turn against Steffy. This could put their reunion in jeopardy, but perhaps there’s still a way to salvage this round of “Steam.”

Will Steffy end up revealing she’s pregnant again? Anytime a younger guy and a gal make love on The Bold and the Beautiful, the topic is fair game.

It’s worth speculating on considering how many surprises pregnancies B&B’s had over the years. Steffy could easily find herself with another bun in the oven.

Liam might decide to put past mistakes to rest and just enjoy his family with Steffy. He could finally determine that they’re meant to be. Steffy was crushed when she had to surrender “Phoebe Forrester” aka Beth Spencer (Madeline Valdez and River Davidson).

It left a huge hole in her heart, so it’d be nice to see Steffy give Kelly Spencer (Zoe Pennington) a new brother or sister – another child Steffy could keep forever.