BY hellodrdavis on January 15, 2020 | Comments: 2 comments
Related : Soap Opera, Spoiler, Television, The Bold and the Beautiful 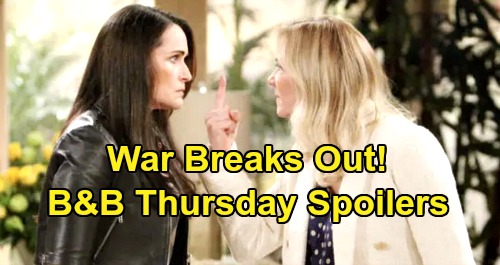 The Bold and the Beautiful spoilers for Thursday, January 16, tease that Brooke Forrester (Katherine Kelly Lang) will continue her tirade to Eric Forrester (John McCook). As B&B viewers know, Brooke has just burst into the Forrester mansion and told Eric that he needs to kick both Shauna Fulton (Denise Richards) and Quinn Forrester (Rena Sofer) out of his home.

That’s a big request, but Brooke is furiously angry over Shauna’s recent kisses with Ridge Forrester (Thorsten Kaye). Even though Brooke isn’t willing to take steps to repair her marriage, she’s determined to push Shauna out of Ridge’s life one way or another.

And now she’s just as angry with Quinn as she is with Shauna, because she assumes (correctly) that Quinn is egging Shauna on to make moves on Ridge. Brooke feels like her relationship with Ridge is under attack, and she’s on the warpath.

Well, on Thursday’s episode, things will get explosive at the Forrester mansion. As B&B viewers know, Quinn has just emerged at the top of the stairs and has been eavesdropping on Brooke and Eric’s conversation.

She’s just heard Brooke tell Eric that both Shauna and Quinn can go back where they came from, and she’s peeved.

But what will happen from here? Well, B&B spoilers say that Brooke and Quinn will engage in an epic showdown, so it appears that Quinn may march down those stairs and tell Brooke a thing or two.

After all, who is Brooke to tell Eric who he can have in his home and in his life? Look for Quinn to angrily confront Brooke and for the argument to rapidly escalate.

The Bold and the Beautiful spoilers indicate that by the end of Thursday’s episode, Brooke and Quinn will have declared war on each other. And that’s not all. Ongoing spoilers for the remainder of the week indicate that both Eric and Shauna will get pulled into this showdown.

Surely, Brooke will have some choice words for Shauna about her kisses with Ridge, and when Shauna gives it back to Brooke, Brooke will violently slap Shauna once again. It’s going to be a bad scene.

Meanwhile, across town, Katie Logan’s (Heather Tom) family and friends will gather for a meeting that she’s called. B&B viewers will remember that Katie sent Wyatt Spencer (Darin Brooks) and Flo Fulton (Katrina Bowden) a text summoning them for a gathering.

It looks like they’ll meet at Spencer Publications, with Bill Spencer (Don Diamont), Will Spencer (Finnegan George), and others in attendance as well.

Katie will do a couple of things during this meeting. First, she’ll make a special request that no one saw coming. Exactly what that will be remains to be seen, but given that Flo was invited, the request could have to do with the family’s relationship with Flo.

Perhaps Katie will want to make some suggestion to the family about how to “repay” Flo for her sacrifice.

Katie will do something else during this meeting – she’ll plead with her family for forgiveness, which is a little puzzling given that Katie hasn’t really done anything lately that would warrant begging for forgiveness.

We’ll see what that’s all about, but it looks like between the special request and Katie’s contrition it will be a pretty moving meeting.