The Bold and the Beautiful Spoilers: Thomas Helps Sally Scam Wyatt – Bad Boy Back In Action? 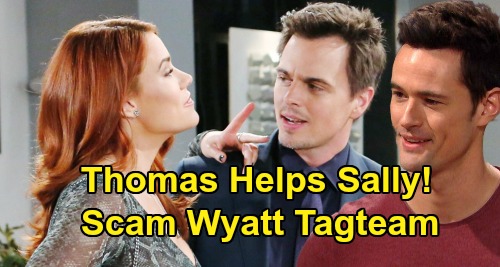 The Bold and the Beautiful (B&B) spoilers tease that Thomas Forrester (Matthew Atkinson) will have to resurface sooner or later. With that in mind, we should consider what Thomas’ next move will be. Hope Logan (Heather Tom) made it clear that Thomas could never have her. After enduring public humiliation as his own wedding, Thomas surely can’t think he still has any kind of shot with Hope.

Of course, soaps are gonna soap! That means there’s always a chance Thomas could reform and truly win Hope over down the road. You can never shut the door on any B&B romance completely. However, Thomas really needs to move on for right now. Perhaps Thomas could use a new project to keep him busy.

B&B fans know Sally Spectra’s (Courtney Hope) working hard to make Wyatt Spencer (Darin Brooks) her man again. Once Thomas pops back up, he may get updates on Sally’s terminal illness and decide to go see her. It may not take Thomas long to figure out Sally’s faking her deadly condition to win Wyatt back.

This might be the perfect storyline for Thomas to jump into next. Thomas might acknowledge that his own scheme didn’t pan out, but he could still think there’s hope for Sally. The Bold and the Beautiful will surely want to keep Thomas as a bit of a bad boy.

It’s best to dial down the creepy stalker vibe and ditch the child abuse, but Thomas should still be a troublemaker. It makes for a compelling character. Although Sally’s terminal illness scam is cruel, it’s her scam and she has to own it. Having Thomas join the plot wouldn’t be so terrible compared to the other things Thomas has done.

In other words, Thomas could keep his scheming side without being completely dark. Since Thomas still cares about Sally as his ex, he’d be helping her in his eyes. Thomas would actually be trying to focus on someone else instead of himself, which would be progress.

This could pave the way for more of a reformation later – and set up the possibility of Thomas’ reunion with Sally when this plot inevitably blows up. The Bold and the Beautiful spoilers say some hot drama’s ahead, so we’ll deliver all the latest B&B news.

Do you think Thomas will join Sally’s team and try to help her win back Wyatt? They may be destined to crash and burn, but at least they could do it together! Stick with CDL for other exciting Bold and the Beautiful spoilers, updates and news.