The Bold and the Beautiful Spoilers: Thursday, April 2 Update – Sally Kills Flo with Kindness, Sends Rival a Gift – Penny’s in a Panic 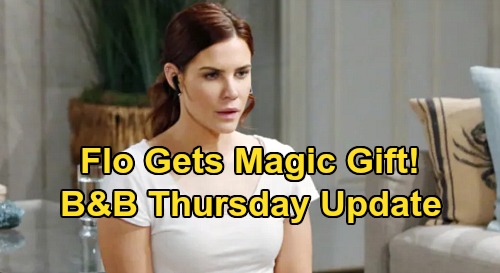 The Bold and the Beautiful (B&B) spoilers update for Thursday, April 2, teases that Sally Spectra (Courtney Hope) will do some eavesdropping. B&B fans know Sally’s plotting to steal Wyatt Spencer (Darin Brooks) back from Flo Fulton (Katrina Bowden), but there’s more work to be done. Wyatt’s still in love with Flo and only cares about Sally as a “dying” friend in need.

As Sally listens in on Flo and Wyatt’s conversation, it’ll become crystal clear that they’re true lovebirds. Wyatt and Flo are still crazy about each other, which isn’t good news for Sally.

To make matters worse, Flo and Wyatt will make plans to meet up once again. Sally won’t like the idea of them carrying on their romance when she’s struggling to pull off this elaborate scheme.

The Bold and the Beautiful spoilers say Sally will keep listening and figure out her next move. Sally may sense that Flo’s starting to question her motives somewhat. She’ll at least feel like it couldn’t hurt to get on Flo’s good side. Sally’s already faking a terminal illness, so faking a solid friendship should be a piece of cake.

Once Sally mulls it over, she’ll determine that she needs to send Flo a special delivery. Sally will want to play the part of a dying woman who still thinks of others. Perhaps Sally will step up her game to compete with Saint Flo – the queen of annoying sacrifices. Sally may also feel like buttering Flo up will keep any suspicions at bay.

Regardless, it looks like Sally’s special delivery will be a pleasant one. That would be in line with her agenda to dupe Flo and paint herself in a positive light.

As for Dr. Penny Escobar (Monica Ruiz), The Bold and the Beautiful spoilers say she’ll be in a real bind. Penny’s growing increasingly uncomfortable with Sally’s “deadly” diagnosis and all the drama it’s causing. Unfortunately, it’s about to cause even more!

While Sally orders that special delivery, Flo will visit Dr. Escobar with some important questions. Certain things just won’t be adding up for Flo, so she’ll want an explanation from Penny.

Flo may wonder why Sally’s not focused on palliative care or squaring away her final arrangements. There may even be questions about the progression of Sally’s illness and how long she has left.

Dr. Escobar will argue that she can’t break doctor-patient confidentiality, but her visceral reaction could tip Flo off. The panicked look in Penny’s eyes could be a strong sign that something’s amiss. Dr. Escobar will definitely be in a hurry to shove Flo out the door, but Flo will stick around as long as she can to gather clues.