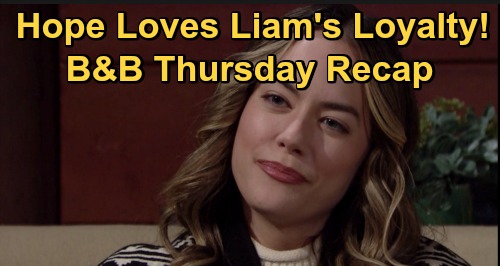 The Bold and the Beautiful spoilers recap for Thursday, December 17, reveal that Steffy Forrester (Jacqueline MacInnes Wood) and Liam Spencer (Scott Clifton) decided that they needed to return to the hospital from the cliff house.

Steffy told Liam that when they walk out that door there was no turning back, and that there was too much at stake here. Steffy said that Liam couldn’t tell Hope Spencer (Annika Noelle) about the affair because it would break her heart.

Meanwhile, at the hospital, Ridge Forrester (Thorsten Kaye) and Hope talked in the waiting area. Ridge praised Hope, saying that Beth Spencer (River Davidson and Madeline Valdez) and Douglas Forrester (Henry Joseph Samiri) were lucky to have her.

Ridge said that Thomas Forrester (Matthew Atkinson) was lucky too, and that he was grateful that Hope was able to get past what Thomas had done in the past.

Hope said that Thomas loves Douglas, and that it had been wonderful watching them rebuild their relationship together. Hope noted that Ridge had been there for Thomas, too.

Ridge then said that Thomas had opened up about what happened with the mannequin. A short time later, John “Finn” Finnegan (Tanner Novlan) came along to say that Thomas was doing very well. Steffy and Liam arrived on the scene as well, and Finn said that Thomas needed to rest tonight.

Steffy noticed that something was weird about Ridge, and she asked him what was wrong. Ridge admitted that he knew about what happened with the mannequin, and that he was glad that it didn’t cause any problems for Liam and Hope.

Liam and Steffy shared a look. Finn took off to go grab his stuff, and Ridge stepped away to take a call.

Hope noticed that Liam looked off, and she asked if everything was all right with him. Liam lied and said that everything was fine. Hope left to go get coffee, and Liam and Steffy looked at each other guiltily.

Later, Steffy and Finn decompressed at the cliff house. Finn helped Steffy clean up Kelly Spencer’s (Colette and Avalon Gray) toys, and Steffy praised Finn for helping to save Thomas. When Finn stepped away, Steffy looked at the portrait on the wall and sighed.

At the cabin, Hope asked Liam how his conference call earlier that evening went. Liam lied and said that it went fine, but he looked miserable about lying.

Hope said that she was grateful for Thomas’ recovery, and Liam praised Hope for her capacity to care about Thomas after everything he’s done. “I don’t know what I did to deserve you,” Liam said. “I hope I never disappoint you again.”

Hope gushed, saying that Liam could never disappoint her. “How could I doubt your love and commitment to me and our marriage?” Hope asked. “I trust you with my heart. I know you will never let me down.” Liam looked horrible.

At Forrester Creations, Zoe Buckingham (Kiara Barnes) and Zende Forrester Dominguez (Delon de Metz) talked about Thomas’ ordeal, and about how he was expected to make a full recovery.

Zende said that part of him will never forgive Thomas for lying to Zoe and hurting her. Zende said that had he been here then, he’d have taken care of Thomas personally.

“No man should ever treat a woman like that – especially you, considering how special you are,” Zende said. Just then, Paris Buckingham (Diamond White) walked in, sensing that she was interrupting something. Zoe and Zende covered, saying that they were talking about Thomas and his head injury.

A short time later, Paris was hanging around as Zoe and Zende were working on a design together. Paris quipped that Zoe and Zende worked well together and that they had mutual respect and admiration for each other. Paris noted that Forrester Creations was lucky to have them as a combination.

That was a great episode of B&B, and there’s plenty more in store for tomorrow, so stay tuned! We’ll be sure to give you updates as B&B news comes in. Stick with the CBS soap and don’t forget to check CDL regularly for the latest Bold and the Beautiful spoilers, news, and daily episode recaps.