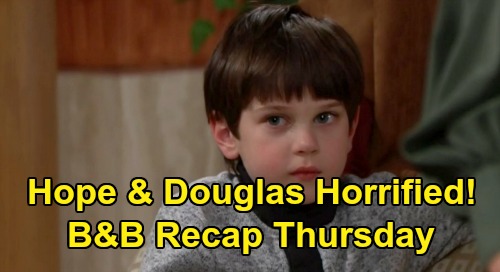 The Bold and the Beautiful spoilers recap for Thursday, February 20, reveal that Steffy Forrester (Jacqueline MacInnes Wood) and Liam Spencer (Scott Clifton) prepared for the big Forrester dinner at Steffy’s place. Liam insisted that Thomas Forrester (Matthew Atkinson) must have something up his sleeve, but Steffy thought that Thomas might have genuine motives for the dinner party and that maybe the party would change Liam’s mind about it.

Soon, Amelia (Nicola Posener) arrived to watch Kelly Spencer (Avalon and Collette Carlish) and she noted that the family dinner sounded like fun. Liam balked, and when Amelia heard that Thomas had a new girlfriend, she was disappointed, as she admitted having a massive crush on him.

Liam advised her to steer clear of him and reiterated that the whole evening was going to be for show to make it look like Thomas was over Hope Logan (Annika Noelle).

At the Forrester mansion, Thomas, Douglas Forrester (Henry Joseph Samiri), and Hope talked in Douglas’ bedroom. Douglas asked Thomas why Zoe Buckingham (Kiara Barnes) had to be there tonight, and he said that he just wanted to have dinner with his Mommy, Daddy, and Beth Spencer (River Davidson and Madeline Valdez).

He went on to say that they used to have dinners together, and Thomas noted that those were good times but that he had a different plan in store for this evening.

Thomas then went downstairs, and Douglas told Hope, “Zoe’s nice, but I want you and Daddy to be together.” Hope reassured him that even though they’re not together, they’re still his parents. This didn’t serve to cheer Douglas up at all, and he looked pretty gloomy about the whole thing.

Downstairs in the living room, Brooke Forrester (Katherine Kelly Lang) showed up and greeted Eric Forrester (John McCook) and Quinn Forrester (Rena Sofer). Brooked noted that she was surprised that she was invited, and Quinn quipped, “That makes two of us.” Brooke stated that she still didn’t trust Thomas where Hope was concerned.

Soon, Zoe arrived, and Thomas came downstairs to greet her as Brooke looked on skeptically. Zoe told Thomas that the gathering really made her feel special and she asked Thomas what he had in store for the evening. Just then, Hope and Douglas came down the stairs, and Thomas leaned in to kiss Zoe. Douglas didn’t look happy at all.

Soon, Steffy and Liam arrived, and Zoe noted to everyone how all of Thomas’ efforts for the evening were so sweet. Ridge Forrester (Thorsten Kaye) said that he hadn’t seen Thomas this happy in a very long time. Brooke balked, and Liam privately told Steffy that Thomas was really laying it on thick.

Douglas and Hope lingered on the staircase, and Douglas told Hope that his tummy hurt. Zoe then walked up to them and tried to make small talk, which didn’t go over well with Douglas. Brooke spoke privately to Hope for a moment, saying that the whole evening was a joke and that Thomas was trying to get a reaction out of her and Douglas.

Thomas then approached Brooke, who lashed out at him. Thomas asked if she wanted a drink – wine or champagne – and Thomas pretended to have forgotten that Brooke doesn’t drink. She then called him out for trying to exploit Douglas’ feelings, and Thomas calmly explained that he was just doing what Brooke wanted by moving on.

Zoe walked up to Brooke and Thomas, and Brooke told Zoe that she had no idea what she was getting in the middle of. Ridge then intervened and pulled Brooke away, while Thomas kissed Zoe again, making sure that Douglas noticed. Quinn got a moment alone with Thomas and told him that he was all over Zoe and that he needed to dial it back.

Steffy was next, asking Thomas what he was up to. He simply said that he was just trying to make dreams come true.

Brooke and Ridge stole a moment alone as well, saying that they missed each other. Ridge then noted that Thomas was trying, which irritated Brooke. Across the room, Liam tried to cheer up Douglas with a joke, which fell flat. He then asked Hope if she saw through what Thomas was obviously trying to do.

Thomas then gathered everyone together, saying that he was glad everyone was here. As Liam and Brooke looked on skeptically, Thomas went on about family and how they were all connected, with Ridge adding his two cents about how they all support each other.

Thomas noted that he had made a lot of mistakes in the past year, and that he was thankful to be standing here with everyone.

He then turned to Zoe, calling her an amazing, beautiful, and wonderful woman. He stated that he was ready to move things forward, and he promptly got down on one knee, took a ring out of his pocket, and said, “Zoe Buckingham, I’m asking you to be my wife. Will you marry me?” Both Douglas and Hope looked horrified.

Be sure to stay tuned to the CBS soap for all the latest B&B action. You won’t want to miss the next episode! And check back with CDL for all your latest Bold and the Beautiful news, spoilers, and updates going forward.