BY hellodrdavis on February 20, 2020 | Comments: 2 comments
Related : Soap Opera, Spoiler, Television, The Bold and the Beautiful 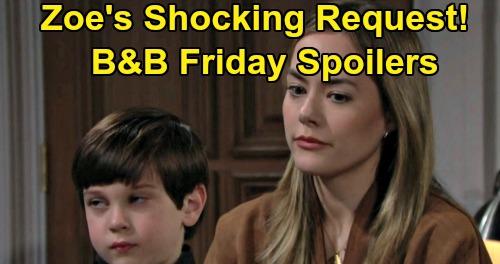 The Bold and the Beautiful spoilers for Friday, February 21, tease that Zoe Buckingham (Kiara Barnes) will have a big decision to make. As B&B viewers know, Thomas Forrester (Matthew Atkinson) has just popped the question to Zoe right there in the Forrester living room in the middle of the family dinner. It looks like everyone will be momentarily stunned by the shocking turn of events.

Nobody really saw this coming, especially since Zoe and Thomas have only been dating for a matter of weeks now. But Brooke Forrester (Katherine Kelly Lang) and Liam Spencer (Scott Clifton) will surely see it for exactly what it is – a serious push in Thomas’ grand plan to get a reaction out of Douglas Forrester (Henry Joseph Samiri), and in turn get a reaction from Hope Logan (Annika Noelle).

We’ll see what happens next, but it’s pretty likely that Douglas will have some sort of meltdown. He was already feeling weird about the whole evening, and he told Hope that his stomach hurt as he was sitting on the stairs and watching Thomas and Zoe canoodle in the living room. He might publicly devolve, or he could simply run out of the room upset.

Whatever happens, B&B spoilers say that Douglas will make an emotional plea to Hope, which will probably be something along the lines of “don’t let my Daddy marry Zoe.” He’ll probably beg Hope not to let Thomas replace her with Zoe, and this should sufficiently get Hope thinking about what’s best for Douglas in this whole scenario…which is exactly what Thomas wants to happen.

Of course, B&B viewers know that Thomas’ big plan is for Hope to decide that she needs to get back together with him in order to protect Douglas. Hope may not make that specific decision on Friday’s B&B episode, but it looks like Thomas will have at least made some inroads on that front.

Interestingly. B&B spoilers also say that Douglas will reveal a secret that he’s been keeping as he makes his big emotional plea to Hope. We’ll see exactly what this is about, but he might tell her that he’s been wishing for them to all be together as a family, or he might have another secret to tell.

Meanwhile, it seems that Zoe won’t have an immediate “yes” to give to Thomas regarding his proposal. Rather, B&B spoilers say that she’ll make a request of Thomas before she’ll even consider saying yes. She’ll make that request publicly, in front of everyone who’s gathered at the Forrester mansion, and what she’s got in mind remains to be seen.

Perhaps her request will have something to do with Douglas. She’s certainly noticed that Douglas hasn’t exactly been thrilled to spend time with her, and she can surely see that he’d prefer for Hope to be with his father.

Perhaps Zoe will tell Thomas that he needs to secure Douglas’ blessing on their union before she’ll say yes. That would totally throw a wrench into Thomas’ plans!

After all, for Thomas, the whole point of proposing to Zoe was to upset Douglas and force Hope’s hand. If Zoe were to say that she needs Douglas to be on board with their engagement before she’ll say yes, then Thomas may need to rethink his next move.

We’ll see if things progress in that fashion, but it’s likely that Zoe’s request will be major and something that Thomas didn’t see coming.

It appears that there’s going to be some serious action on Friday’s episode, so don’t miss it! Keep watching the CBS soap and keep checking back with CDL for all your latest Bold and the Beautiful spoilers, recaps, and news.