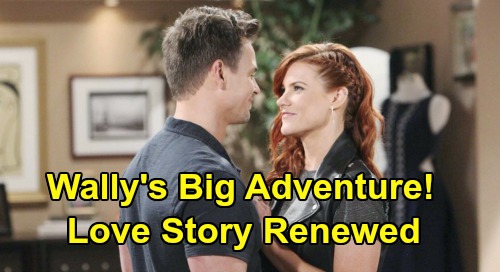 The Bold and the Beautiful (B&B) spoilers tease that Wyatt Spencer (Darin Brooks) will have another crucial conversation with Flo Fulton (Katrina Bowden). B&B fans know Sally Spectra (Courtney Hope) was recently diagnosed with a deadly illness. She has less than a month to live according to her doctors, so Wyatt’s quite broken up over all this.

With that in mind, Wyatt will take steps to ensure Sally lives life to the fullest. Since Sally doesn’t have much time left, Wyatt will want to help Sally make some great memories and die happy. She shouldn’t have to face death so soon, but Wyatt will hope to give Sally the closure she needs.

The Bold and the Beautiful spoilers say Wyatt and Flo will be on the same page as they discuss this plan. Flo will give Wyatt her approval on Sally moving in with him, so Wyatt will indeed make the offer. He’ll make a shocking confession to Sally and apparently suggest they should get their life together back on track.

It sounds like Wyatt will pretend Sally was right. The Bold and the Beautiful viewers will recall that Sally was initially in denial about their breakup. She felt like Wyatt just needed a few days to get his head on straight. Sally felt confident Wyatt would come around and remember the great love they shared.

Wyatt could use that hope to his advantage and apologize for drifting away. He may push Sally to take him back and revive their engagement. Naturally, Sally will worry that Katie Logan (Heather Tom) might’ve spilled her secret to Wyatt. She’ll confront Katie about potentially blabbing – and B&B fans know she did!

It’s possible Katie will lie and claim she didn’t say a word, but she may struggle to do that. Besides, Sally isn’t dumb. Based on what we know comes next, Sally shouldn’t reasonably believe Wyatt’s just doing this because he saw the light. B&B writers might try to work that angle, but it wouldn’t make much sense.

During the week of March 2-6, The Bold and the Beautiful spoilers, updates and news say Wyatt will plan a big adventure with Sally. He’ll basically want to help Sally pull off all her bucket list goals and make her final weeks special. Sally will surely get the picture at that point – at least we hope she will!

This all seems like a setup for Wyatt to fall back in love with Sally and become torn about Flo when Sally miraculously survives. Death feels far from certain based on how this story’s going, so let’s hope Sally indeed pulls through.

What will Sally and Wyatt do on this adventure of theirs? What kind of fun scenes would you like to see? We’ll offer more updates as other B&B news emerges, so check CDL often for hot Bold and the Beautiful spoilers.