BY hellodrdavis on February 16, 2020 | Comments: 2 comments
Related : Soap Opera, Spoiler, Television, The Bold and the Beautiful 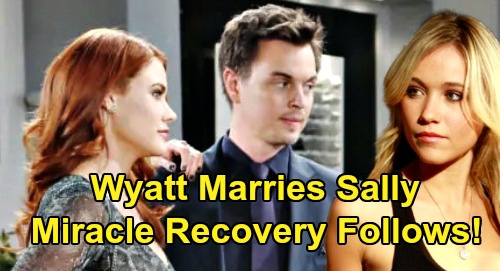 The Bold and the Beautiful (B&B) spoilers tease that Wyatt Spencer (Darin Brooks) will soon be making a huge sacrifice for Sally Spectra (Courtney Hope). As B&B viewers know, Wyatt is reeling from the terrible news he’s heard about Sally’s terminal health condition. Sally doesn’t yet know that Wyatt knows about her health status, and Wyatt’s at a loss as to what to do.

But it seems that Flo Fulton (Katrina Bowden) has an idea as to what Wyatt’s next course of action should be. She hasn’t said as much yet, but on the episode airing on Friday, February 14th, she told Wyatt that he knew what he needed to do.

That sounds an awful lot like Flo thinks that Wyatt should go be with Sally during her final days of life. Sally’s been given about a month to live due to her quickly progressing condition, so time is of the essence.

Well, given that B&B spoilers say that Wyatt will soon make a big sacrifice for Sally, it looks like he might just go to Sally and express his desire to rekindle things with her.

Of course, it’s a bit tricky since Sally doesn’t know that Wyatt knows about her condition – but perhaps Wyatt will think that his final gift to Sally could be to reinstate their engagement and go through with a wedding, so that Sally dies having fulfilled one of her dreams.

If that’s the case, then we could be seeing a “Wally” wedding coming up soon. It would be a sad and bittersweet event for sure, but stepping away from Flo and marrying Sally would be a big sacrifice on Wyatt’s part in that he’d be putting his relationship with Flo on hold.

But it would also be something that Wyatt would probably be honored to do for Sally, since he cares about her still so much.

Supposing that Wyatt and Sally do get married, that could lead to all sorts of issues down the line. Right now, Sally’s prognosis is bleak, but Katie Logan (Heather Tom) is adamant that Sally needs to pursue specialists and clinical trial options, even if there’s only a slight chance that it could help her or buy her more time.

Bill Spencer (Don Diamont) could start throwing money around and you never know what could happen. It would certainly be a very soapy twist if Sally were somehow able to be cured after all, but you know that if that happens, it would surely come after Wyatt and Sally were married.

What if Wyatt goes through with his plan to marry Sally, thinking sadly that she’s going to eventually pass away, but then Sally ends up beating this thing and Wyatt’s now married to Sally but wants to be with Flo?

That would be a pretty tricky situation, and Wyatt would surely be hesitant to have to admit to Sally after she’s found her miracle cure that he just married her because she was dying.

And if Sally’s newfound cure and well-being were somehow dependent on her not facing a lot of stress…well, you can see how Wyatt could feel stuck, even though he really wants to be with Flo.

We’ll see what ends up happening here, or whether this scenario with Wyatt marrying Sally and then Sally getting a cure actually happens, but it would certainly make for some great drama on the show.

Do you think that Wyatt will end up marrying Sally, only to have a cure materialize for her after the wedding? Keep on watching the Bold and the Beautiful, and be sure to check back with CDL often for your latest soap news, recaps, and spoilers.