The Bold and the Beautiful Spoilers Next 2 Weeks: Brooke Forgives Thomas – Wyatt Gives Up Flo for Sally – Zoe’s Shocking Request

BY Heather Hughes on February 16, 2020 | Comments: one comment
Related : Soap Opera, Spoiler, Television, The Bold and the Beautiful 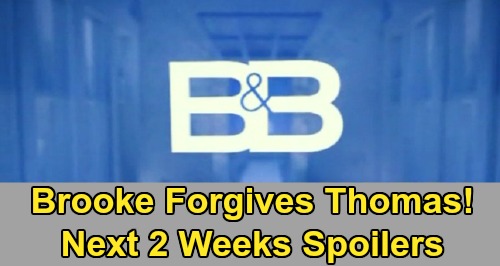 The Bold and the Beautiful (B&B) spoilers for the next two weeks tease that some tough moments are on the way. During the week of February 17-21, Wyatt Spencer (Darin Brooks) will remain heartbroken over Sally Spectra’s (Courtney Hope) deadly illness. He’ll lean on Flo Fulton (Katrina Bowden), who’ll give him a nudge back in Sally’s direction.

It sounds like Flo will want Wyatt to be with Sally for the last month of her life, but Wyatt should give Sally some space at first. Honestly, Wyatt needs a little time to process all this as well. It’s a difficult situation all around, but Flo will be there to offer Wyatt comfort.

Over with Hope Logan (Annika Noelle), she’ll rant at Liam after listening in on the same confrontation. Hope will think Liam needs to give all this Thomas takedown stuff a rest. She’ll be fed up with Liam acting like he’s any better since he was off kissing Steffy Forrester (Jacqueline MacInnes Wood).

Nevertheless, Liam won’t be deterred from his mission to expose Thomas. He’ll try to get through to Zoe, who’ll indeed battle doubts about Thomas sincerity.

As for Hope, she’ll feel terrible as Douglas Forrester (Henry Joseph Samiri) passes along a message – one he’ll be manipulated into giving Hope. It looks like Thomas will make sure Hope knows just how badly Douglas wants Daddy and Mommy Hope to be an item.

Douglas will also express concerns about losing Hope again. He won’t be able to shake the fears that Hope will be replaced by Zoe – and Thomas’ next move isn’t going to help.

Thomas will host a special dinner at the Forrester mansion with a goal in mind. The Bold and the Beautiful spoilers say Thomas will ultimately pop the question to Zoe and leave her in total shock.

Zoe will make a request in front of everyone in hopes of ensuring this offer’s legit. She’ll worry that Liam might be right and that Thomas is just doing this to get Hope back. Thomas will have to make it clear with his actions that Zoe’s the one for him now, even though that’s not how he feels.

Back with Douglas, he’ll beg Hope for something only she can give. Douglas’ heartfelt plea will come with a confession. The kid will admit he’s been keeping a secret, so we’ll see what Douglas updates Hope on.

Brooke Forrester (Katherine Kelly Lang) will stand her ground on believing Thomas is a manipulator. She’ll call Thomas out in an upcoming discussion and accuse him of putting on a Zoe show for Hope’s benefit.

During the week of February 24-28, Brooke will decide to tackle all the Thomas drama from another angle. She hasn’t been getting anywhere with Ridge Forrester (Thorsten Kaye), so she’ll hope this tactic might work.

Brooke will agree to compromise with Ridge on the topic of his son. She’ll make a deal that’ll involve forgiving Thomas, but certain conditions will have to be met.

Brooke might argue that if Thomas indeed makes Zoe his wife, then she’ll agree to put the past to rest and forgive him. Naturally, it’s doubtful Brooke will think that’s ever going to happen.

Back with Wyatt, The Bold and the Beautiful spoilers say he’ll put someone else’s needs before his own. A major sacrifice is coming up, so that’ll probably involve putting his love for Flo aside and trying to get back with Sally.

Will Sally even want Wyatt after the way he’s treated her? Will Sally suspect Wyatt knows about the news of her impending death? B&B fans will be eager to see how it all turns out. We’ll have all the latest B&B news and updates for you, so stop by CDL frequently for plenty of hot Bold and the Beautiful posts.