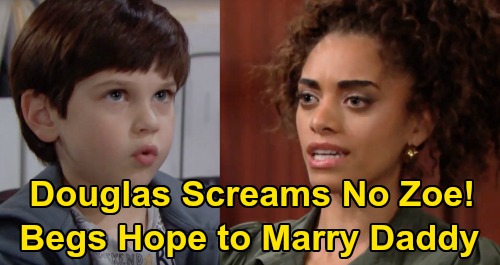 The Bold and the Beautiful (B&B) spoilers tease that Thomas Forrester (Matthew Atkinson) will concentrate on the last step of his plan. He’ll believe this will be the final nudge – the one thing that’ll push Douglas Forrester (Henry Joseph Samiri) over the edge and make a united “Thope” family.

Thomas will put this last step in motion at a Forrester family dinner. B&B spoilers say he’ll want a public spectacle for maximum impact. Thomas has always been pretty impulsive throughout his whirlwind romance with Zoe Buckingham (Kiara Barnes).

That’s undoubtedly part of the appeal for Zoe. She’s letting herself get swept up in Thomas’ spontaneity and charm.

Thomas will ask Zoe to marry him as this dinner, which will certainly catch her off guard. Part of her will be thrilled that Thomas is ready for that level of commitment.

Another part of her will be suspicious, especially since Liam Spencer (Scott Clifton) will be whispering in her ear. Liam always has to save all the damsels in distress – and he feels particularly responsible here since he dragged Zoe into this.

As a result, Liam will keep pushing Zoe to see through Thomas’ agenda. He’ll want Zoe to accept that she’s being used, but Zoe will hold out hope that this is real.

Zoe will decide to say yes to Thomas’ proposal, but she’ll want him to do something first. There’ll be some condition on accepting Thomas’ offer of marriage, so it should involve proving himself somehow.

Of course, Thomas doesn’t really want to marry Zoe and surely doesn’t intend to. He’ll probably do or say just about anything if it means Zoe will agree. Thomas will be eager for this engagement news to spread. He’ll want to give Hope updates on their wedding plans and put Douglas in meltdown mode in the process.

The Bold and the Beautiful spoilers say Thomas will indeed leave Douglas panicking. The poor kid will make a plea of his own; he’ll have a desperate request for Mommy Hope that could leave her questioning what’s best.

Will Douglas beg Hope to remarry his daddy instead? That seems like a reasonable thing for Douglas to do. He’ll worry about losing Hope as a mother, so this may be how he clings to her role in his life.

However, The Bold and the Beautiful spoilers also point to a huge sacrifice for Thomas. If the emotional turmoil becomes too much for Douglas to take, Thomas may finally see that he has to end this craziness. We’ve always got some hot Bold and the Beautiful updates and news here at CDL, so be sure to stop by often and stay tuned to B&B!