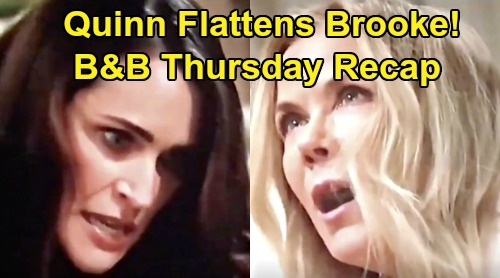 The Bold and the Beautiful spoilers recap for Thursday, January 16, reveal that Brooke Forrester (Katherine Kelly Lang) reiterated her demand that Eric Forrester (John McCook) kick both Shauna Fulton (Denise Richards) and Quinn Forrester (Rena Sofer) out of the mansion.

As Quinn watched from the top of the staircase, Brooke told Eric to “send them back to the desert where they belong.” Quinn then left without making her presence known.

Meanwhile, in the guest house, Shauna finished up her phone conversation with Ridge Forrester (Thorsten Kaye) when Quinn entered. Quinn fumed that she just overheard Brooke talking to Eric and ranting like a lunatic.

Quinn told Shauna that Brooke was trying to destroy then both, and that there was no way she was going to let Brooke get away with this.

Back in the Forrester living room, Brooke continued to implore Eric to get rid of Shauna and Quinn, but Eric said in no uncertain terms that he wasn’t going to divorce Quinn and that sending Shauna to the desert wasn’t going to help.

Brooke seemed to calm down a bit, and Eric had to go to the office. Brooke stayed behind because she couldn’t find her phone.

Quinn then walked in and revealed that she had overheard what Brooke had said to Eric earlier. Brooke launched into a tirade about Shauna going after Ridge, and how Shauna could go stay with “Felony Flo” instead of staying at the mansion.

Quinn then told Brooke to back off and stop attacking her marriage to Eric, prompting Brooke to say that Quinn was threatened by her history with Eric.

Quinn said she wasn’t threatened yet, and that Brooke shouldn’t do anything to make her feel threatened. Quinn went on to say that she made Eric happy and was a good Forrester matriarch, which Brooke scoffed at.

They argued for a while, and soon Shauna walked in, just in time to hear Brooke say that Shauna was so beneath Ridge that it was laughable.

Shauna challenged Brooke to say that to her face, which Brooke did, prompting Shauna to say that the way Ridge kisses her says otherwise, and that it was no wonder that Ridge was looking for something better.

Brooke then hauled off and slapped Shauna. Brooke noted that she learned how to do that from the “real” matriarch of the mansion, and that Stephanie Forrester’s (Susan Flannery) picture is going to go back up and Quinn’s will come down.

That led Quinn to slap Brooke big time, saying that Brooke was nothing but poison to this family and that Stephanie had tried to get rid of her for years. Brooke yelled that Quinn had no idea, and the two women came face to face, with Brooke yelling that if Quinn wanted a war, she’s got one.

At Forrester Creations, Eric arrived and demanded some answers from Ridge. He wanted to know why Ridge had been making out with Shauna, and Ridge said that he needed Brooke to know about it.

Eric wondered if that was the right call, since Brooke was really hurting right now. Ridge was horrified to learn that Brooke approached Eric wanting him to get rid of Shauna and Quinn.

Katie started the meeting explaining that Flo had given up a part of herself so that she could live, and that she wanted everyone to offer Flo forgiveness. Katie explained that she hated that Flo went along with the lie, but that life was too short and precious.

Will then piped up and said that he didn’t know all the details about what Flo did, but that Flo saved his mom and he’ll give her another chance.

Katie turned to Flo and said that she had said harsh things before, including that Storm Logan (William deVry) wouldn’t be proud of her, but that it wasn’t true. Bill noted that Katie was asking a lot of them, but Katie said that forgiveness isn’t easy, but that it was necessary.

Katie revealed that she and Flo had been talking nearly every day and that Flo wouldn’t forgive herself, so they needed to forgive her – right here, right now.

Donna then spoke up and said that Flo had her forgiveness, and the two women hugged. Bill said that if Flo feels genuinely remorseful, then he’d try to believe it.

Wyatt noted that Katie was smart for bringing them all together, that one lie didn’t define Flo, and that they were all lucky to have Flo in their lives.

Later, Once Flo and Wyatt were alone in the office, Flo was appreciative for Wyatt’s support, and Wyatt said that he appreciated Flo’s remorse now in a way that he didn’t before.

Wyatt said that he has been a bit lost lately, and that ever since the truth came out, he was searching for a way to move on with his life without Flo in it. But he noted that she was the one he wanted a future and a family with.