The Bold and the Beautiful Spoilers: Thursday, January 9 Recap – Hope Stunned and Disgusted By Steffy and Liam’s Passionate Kiss 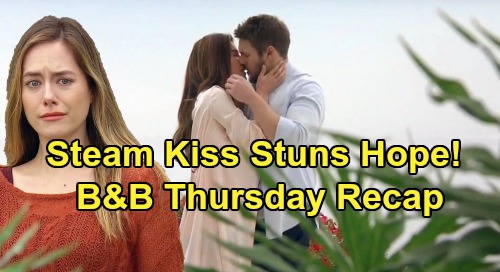 The Bold and the Beautiful spoilers recap for Thursday, January 9, reveal that Hope Logan (Annika Noelle) lamented to Brooke Forrester (Katherine Kelly Lang) at Brooke’s mansion. She recounted how Liam Spencer (Scott Clifton) had proposed with stipulations then walked out and never came back. Hope wondered where Liam could be.

Meanwhile, Liam woke up on the couch at Steffy Forrester’s (Jacqueline MacInnes Wood) house. Steffy soon learned about Liam’s failed marriage proposal. After Kelly Spencer (Zoe Pennington) went off to her play date, Liam explained that he and Hope had no future with Thomas Forrester (Matthew Atkinson) in the picture, and that he had walked out on her.

As Liam went on about trying to give Hope the life that they’d always dreamed about, Steffy got upset, and Liam realized that he was being a jerk and apologized. Steffy said that she understood and that she just wanted to be supportive.

Steffy and Liam took hands and Liam explained that he just wanted to vent and there’s nobody else he’d rather talk to than her.

At Forrester Creations, Thomas was sketching when Zoe Buckingham (Kiara Barnes) came in and kissed him. Ridge Forrester (Thorsten Kaye) walked in mid-kiss, and Zoe left.

Thomas thanked Ridge for supporting him when no one else would, and that he was really trying to build a family for Douglas Forrester (Henry Joseph Samiri). Thomas then left, saying that he had something to handle that couldn’t wait.

Thomas showed up at Brooke’s place, where he eavesdropped on Hope and Brooke’s continuing conversation. He listened angrily as Brooke urged Hope to go to Liam and not let Thomas interfere with her future.

Brooke called Thomas a virus in their family – someone who corrupts everything that’s good. Hope decided that she needed to talk with Liam, and she dialed his number.

Liam answered the call at Steffy’s, and he explained that he spent the night with Kelly Spencer (Zoe Pennington). Hope asked Liam to come to the cabin to talk, and Liam agreed. With Thomas still eavesdropping, Hope decided that she must go to Steffy’s house and talk to Liam immediately.

Hope took off, and unbeknownst to her, so did Thomas. And at Steffy’s place, Liam went outside for a few moments to look at the waves and think.

Back at Brooke’s place, Ridge walked in to find Brooke still in her nightgown. He had come to see Hope, to tell her that he was impressed with her work with Thomas.

Brooke then told him that Liam proposed to Hope last night, but that Thomas was keeping them apart. They decided not to talk about Thomas, and Brooke kissed Ridge passionately before asking him to come back home.

On the cliff outside Steffy’s house, Steffy joined Liam. They talked about how much they loved the view, and Liam asked if he could stay awhile. He then walked out along the cliff while Steffy privately took a call from Thomas, who was on his way to Steffy’s.

Thomas hurriedly explained that Hope was on her way, and he asked Steffy if she wanted to be with Liam as a family. Thomas revealed that Hope was about to pull up to the house, and that he’d call Steffy’s phone when the moment was right. “You know what to do, Steffy,” he said. “Do it.”

Steffy looked torn, then went out to join Liam alongside the cliff. Steffy told Liam that she was grateful for all the time he’s spent with her and Kelly, and that he hoped she knew what he meant to her.

Then Steffy asked if she could give Liam a hug. Liam agreed, and they hugged. Just then Steffy’s phone rang. Steffy told Liam to ignore it, and she kissed him. Liam clearly kissed back, and just then Hope walked up and spied the kiss, as did Thomas, who was secretly watching from behind some fence.

Steffy and Liam then saw Hope watching them. Liam looked horrified, while Hope shook her head in utter disgust.

When you see the guy you love with his ex… 😭 #BoldandBeautiful pic.twitter.com/9VShyr0jvk