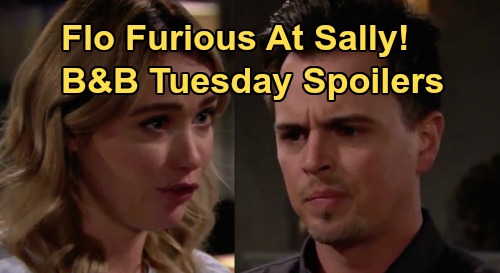 The Bold and the Beautiful spoilers for Tuesday, April 7, tease that Wyatt Spencer (Darin Brooks) will be feeling pretty uncomfortable. As B&B viewers know, he’s in the midst of a conversation with Sally Spectra (Courtney Hope) at the beach house. Sally has just told Wyatt that she still loves him, and that she’ll seek treatment if she has something to fight for…namely a future with him.

Well, it doesn’t look like Wyatt’s going to know what to say in response to that. He knows that Sally knows that he’s madly in love with Flo Fulton (Katrina Bowden), and so Sally’s request is going to really put Wyatt on pins and needles. Wyatt will probably ask Sally exactly what she means by “wanting” him, which is a reasonable question.

It looks like Sally will go on to explain that she’ll go forward and gain back her fighting spirit where her illness is concerned if Wyatt agrees to be with her going forward as a couple in every sense of the word. Sally could even tell Wyatt that she wants them to be intimate during the time she has left, which would really put Wyatt in an awkward spot.

Meanwhile, on the new episode of B&B on Tuesday, April 7, Flo will be over at the hospital continuing her visit with Dr. Penny Escobar (Monica Ruiz). Flo has been quizzing Dr. Escobar about Sally’s potential treatment options, and Dr. Escobar has just told Flo that she won’t discuss Sally’s case any longer.

But as B&B viewers know, Flo senses that something’s awry, and she’s just asked Dr. Escobar what else is going on here. It doesn’t look like Dr. Escobar is going to say anything, but soon Flo will see something that will pique her curiosity.

The Bold and the Beautiful spoilers say that Flo will lay eyes on Dr. Escobar’s sketch pad with some fashion designs prominently displayed.

This will strike Flo as quite a coincidence, since Sally is also a fashion designer. But it doesn’t appear that Flo will have enough information yet to realize that Sally and Dr. Escobar had a previous relationship prior to Sally becoming Dr. Escobar’s patient. But Flo will tuck away that piece of intel, which will probably become important later.

Later, it looks like Flo and Wyatt will regroup, and they’ll each have news for the other. Flo will recount how she couldn’t get anything out of Dr. Escobar, and she’ll probably mention seeing the sketches.

But then Flo will hear Wyatt’s news about Sally’s quid pro quo, and Flo will start to realize that something fishy is going on here. Flo will tell Wyatt that Sally’s assertion that she’ll only fight if she can be with him is emotional blackmail.

Flo isn’t going to be happy about this development at all, and it will just seem like there’s something untoward going on here, but it will be a delicate situation since both she and Wyatt are still under the belief that Sally is dying.

Wyatt’s not going to know what to do – after all, he wants nothing more than to help Sally get better, but he doesn’t want to live a lie, either, or give Sally false hope.

So it seems that Flo and Wyatt will have a decision on their hands, as Wyatt will now be in a position to possibly save Sally’s life (at least as far as he believes) by agreeing to be with her as a couple, while Flo is going to have some serious skepticism about Sally’s motives.

Flo risks being seen as the bad guy in Wyatt’s eyes if she objects to Wyatt being with Sally, yet she’ll thoroughly object to Wyatt giving in to Sally’s demands. At any rate, it seems that Wyatt will have a big decision on his hands, and neither Sally nor Flo will make the decision easy on him, that’s for sure!

Stick with B&B and be sure to tune in to Tuesday’s episode for all the great drama! We’ll be sure to keep you up to speed on the latest B&B developments here at CDL. Remember, we’re your source for the latest B&B spoilers, recaps, and news!