The Bold and the Beautiful Spoilers: Sally’s Pregnancy Trap, Convinces Wyatt to Make Love – ‘Wally’ Baby the Next Step? 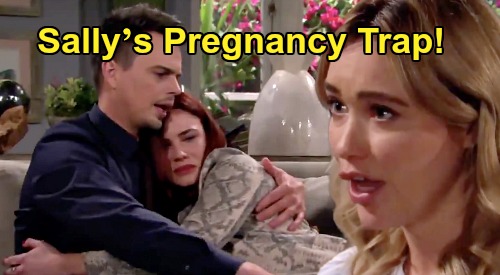 The Bold and the Beautiful (B&B) spoilers tease that Sally Spectra (Courtney Hope) will decide to play dirty in her fight for Wyatt Spencer’s (Darin Brooks) heart. Sally knows Wyatt’s still in love with Flo Fulton (Katrina Bowden), so she’ll feel like she has to do something drastic. If Sally can’t cut things off between Flo and Wyatt, she’s never going to get what she wants.

With that in mind, Sally will play up the “woe is me” angle and suggest she’s all out of hope. Since Wyatt is still with Flo, Sally won’t see why she should seek treatment. She’ll ask what’s the point is if she can’t be with Wyatt.

That’ll be tough for Wyatt to hear, so he’ll feel terrible about all this. Wyatt may not be in love with Sally, but he certainly still cares about her.

B&B spoilers say Sally will present Wyatt with an intriguing offer. She’ll suggest she’s willing to undergo treatment and give herself a fighting chance. In return, Sally will want to be with Wyatt – really be WITH Wyatt. In other words, Sally will want more than just living in Wyatt’s house. She’ll want to be an actual couple and do all the normal couple-y things.

Naturally, that also means Wyatt would have to break up with Flo and date only Sally. It’s obvious that Sally’s not looking to share her man! Sally wants Wyatt all to herself, so she’ll view this as a good angle to make it happen.

The Bold and the Beautiful spoilers say Wyatt may need some time to mull everything over. The fact that Sally’s even offering this deal should leave Wyatt taken aback.

Wyatt may view Sally’s move as a bit manipulative, but he’ll probably brush it off as desperation. Since Sally’s seemingly distraught enough to push for this, Wyatt will likely be upset enough go for it.

What happens if Sally gets the couple status she desires? Sally can start her fake treatment and show signs of improvement. The next logical step would be making love.

If Sally wants to be an official item with Wyatt, she’s not expecting them to sit home and knit. There’ll surely be an understanding that Sally and Wyatt will do what they did before – back when they used to be a real couple.

Of course, that brings the possibility that Sally will end up with a bun in the oven. Sally might even intentionally try to get pregnant. If Sally would resort to faking a terminal illness, she’d definitely try to trap Wyatt with a baby. The Bold and the Beautiful spoilers say Sally will do whatever it takes!

It sounds like some gripping drama’s on the way, so we’ll pass along updates as other B&B news emerges. Do you think Sally will get pregnant? Will a baby be the next step in Sally’s plan? CDL’s the place to be for sizzling Bold and the Beautiful spoilers, updates and news.