BY Heather Hughes on April 4, 2020 | Comments: one comment
Related : Soap Opera, Spoiler, Television, The Bold and the Beautiful 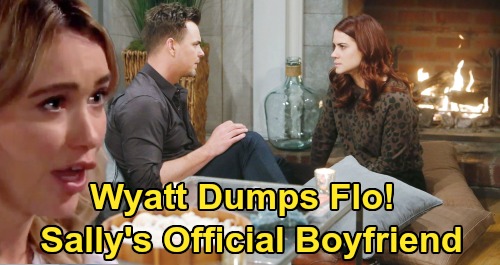 The Bold and the Beautiful (B&B) spoilers tease that Sally Spectra (Courtney Hope) will sink lower than ever to score a victory. Sally’s already resorted to a pretty horrible strategy to win Wyatt Spencer (Darin Brooks) back. She’s pretending she’s dying so Wyatt will love her again, which is all kinds of wrong – and all kinds of desperate!

This isn’t a good look for Sally, but it’s the story B&B’s going with and we’ll just have to roll with it. Although it’s a shame to see a great character like Sally reduced to this, it’ll still be interesting to see how far she’ll go. The Bold and the Beautiful’s latest promo reveals Sally’s next step – and it’s a real doozy.

Sally will be fed up with how long this is taking, so she’ll up the ante by refusing treatment unless Wyatt reunites with her. In Sally’s twisted speech, she’ll act like there’s no point in living if she can’t have the man she wants.

Sally will indicate that things would be different if she could actually be with Wyatt – if they could have a real relationship with NO Flo Fulton (Katrina Bowden) in the picture.

The Bold and the Beautiful spoilers say Sally will promise to fight for her life, but only if Wyatt will be a couple with her. In other words, Sally will threaten to die unless Wyatt dumps Flo and becomes her official boyfriend instead.

It’s cruel to manipulate Wyatt this way, but Sally will feel like it’s her only option. She won’t see any other tactic that’ll end Wyatt and Flo’s love story.

When Flo hears the news of Sally’s deal, she’ll think Sally’s preying on Wyatt’s vulnerability. Flo will see that Wyatt’s a wreck over Sally’s condition, so she’ll view Sally’s move as emotional blackmail which it clearly is.

The Bold and the Beautiful spoilers say Flo will think Sally’s gone too far, but Wyatt may think Sally’s just reeling and doesn’t know what else to do.

If Wyatt doesn’t agree to this, he’ll feel like Sally’s blood will be on his hands. Sally’s making it so Wyatt believes he controls whether she lives or dies – at least if the “treatment” works. That sounds downright awful, but Sally will push for some relationship status updates and hope for the best!

More twists and turns are ahead in this B&B storyline, so don’t miss all the action. Do you think Sally’s going overboard with her plan? Is Wyatt really worth all the trouble? CDL’s your hotspot for exciting Bold and the Beautiful spoilers, updates and news posts.