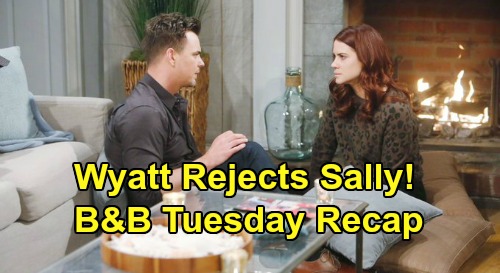 The Bold and the Beautiful spoilers recap for Tuesday, April 7, reveal that Steffy Forrester (Jacqueline MacInnes Wood) and Katie Logan (Heather Tom) caught up in the Forrester CEO office. Steffy was surprised to see Katie there, and Katie revealed that she and Bill Spencer (Don Diamont) were no longer living together but that she wanted to get to work.

Katie suggested they turn to marketing strategies for Sally Spectra’s (Courtney Hope) contribution to the couture line. Steffy sadly suggested that work quickly, otherwise Sally might not be around to see it. Steffy mentioned Zoe Buckingham’s (Kiara Barnes) concern about Sally living with Wyatt Spencer (Darin Brooks), but Katie didn’t think that Flo Fulton (Katrina Bowden) should feel threatened – after all, Sally didn’t have much time left.

Steffy mused about how she never thought she’d forgive Sally for stealing her designs back in the day, but then she got to know Sally and came to like her. Steffy said that this whole situation really makes you tell the people you love how you feel. Steffy and Katie noted that it was inspiring to see everyone rallying around Sally, especially Flo and Wyatt.

Meanwhile, at the beach house, Sally told Wyatt that she’d fight and seek medical treatment if he came back to her. Wyatt hesitated and said that while he still feels love for Sally, it’s different than what she’s wanting from him. Sally went on, insisting that a love like theirs doesn’t just go away, and that her love for Wyatt had never wavered.

Wyatt looked really uncomfortable as Sally talked about how she was grateful to be there in “their” home, and that she wouldn’t want her life to end anywhere else. Wyatt said that he didn’t understand why Sally wasn’t seeking treatment, and Sally said there was no point. “If I knew there could be something between us, I would do anything, but you’ve made it clear that there’s not,” Sally said.

Sally then leaned in and tried to kiss Wyatt, but he pulled away and said that they all needed to be on the same page about boundaries. Wyatt was very clear that he wanted Sally to be happy, but that he couldn’t let her confuse that with something else. Wyatt then held Sally, and Sally looked miffed.

Over at the hospital, Flo tried desperately to get Dr. Penny Escobar (Monica Ruiz) to give her any information that would help her help Sally. Dr. Escobar refused to fork over any information, citing HIPPA guidelines and the need to keep patient information confidential. Flo begged for information about what to expect in Sally’s final days, but Dr. Escobar wouldn’t budge.

Back at the beach house, Flo and Wyatt talked. Wyatt uncomfortably told Flo that Sally had opened up about her feelings and that Sally had tried to kiss him. Wyatt assured Flo that he had set boundaries again, but that Sally wanted to get back together as a condition on which she’d seek treatment.

Flo reeled at that news, saying that while she has compassion for Sally, it’s emotional blackmail for Sally to make being with Wyatt a condition on whether she fights for her life. Wyatt and Flo embraced, with each feeling uncomfortable over the way things were going down.

That was a terrific episode of B&B, and there’s more to come this week. Stay tuned to the CBS soap, and remember that we’ve got all your Bold and the Beautiful recaps, spoilers, and updates right here at CDL.