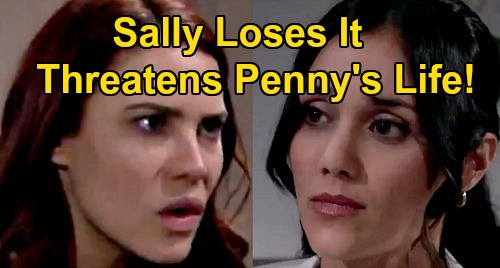 The Bold and the Beautiful (B&B) spoilers tease that Sally Spectra (Courtney Hope) will have another heated confrontation with Dr. Penny Escobar (Monica Ruiz). The closer Flo Fulton (Katrina Bowden) gets to the truth, the more nervous Penny will become. It’ll become clear to Sally that she needs to get her partner in crime under control – and fast!

Penny will grow increasingly fed up with the mess Sally’s gotten her into. Although Penny made the choice to get on board, she’ll still feel like this is Sally’s fault. Dr. Escobar will once again push Sally to just move forward with the miracle cure already. Penny will argue that the longer they wait, the more chance there’ll be of getting caught.

However, Sally’s going to have a big problem with ending things too soon. Wyatt Spencer (Darin Brooks) is still in love with Flo, so Sally needs more time to win him over. Even if Wyatt agrees to be a couple again so Sally will seek treatment, Sally will have to rev up the romance.

Wyatt can’t turn off his feelings for Flo overnight, so Sally would want her “treatment” to work over the course of several weeks or months. Penny’s ready for this nightmare to be over NOW, so these schemers definitely won’t be on the same page.

The Bold and the Beautiful spoilers say Penny will accuse Sally be being completely obsessed with Wyatt. Dr. Escobar will probably see just how sick and twisted Sally’s plot is becoming.

After all, Sally’s threatening to surrender to death if Wyatt doesn’t take her back. She’s making Wyatt feel like Sally’s life is in his hands – and that’s way too much pressure.

There’s a good chance Dr. Escobar will get updates on Sally’s latest maneuver – most likely from Flo. B&B fans can expect a disgusted Penny to decide enough is enough. Perhaps Penny will decide that if Sally won’t reveal the truth, she’ll just have to do it herself.

How will Sally stop Dr. Escobar from exposing their secret deal? Penny may not be persuaded by threats related to her career anymore. This is wrong, so Penny may feel like she has to do this – no matter the consequences. Sally may have to raise the stakes and show Penny that she means business.

The Bold and the Beautiful spoilers say this storyline will eventually bring a life-or-death situation. B&B seems to be making Sally the female version of Thomas Forrester (Matthew Atkinson). Sally’s obsession is driving her off the deep end, so she may take a page out of Thomas’ playbook.

Thomas tossed some deadly threats around during the baby swap drama, so it may be Sally’s turn to do the same. Will Sally threaten to kill Penny? Sally might say something like if Penny doesn’t cooperate, she’ll be the one who’s facing a terminal outcome!

Bottom line, Sally’s sinking deeper and deeper into a dangerous obsession. She could be going crazy, so who knows how far she’ll go to make Wyatt her man again? As other B&B news emerges, CDL will deliver all the latest details.

Do you think Penny’s life is at risk? Is Sally out of control? Don’t forget to pop back in again soon for the hottest Bold and the Beautiful spoilers, news and updates.