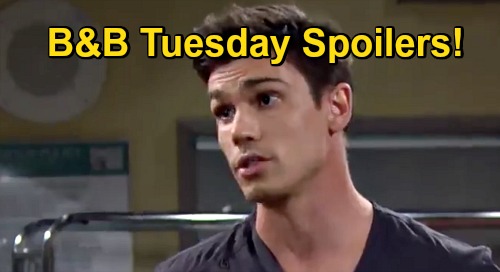 The Bold and the Beautiful spoilers for Tuesday, December 8, tease that Thomas Forrester’s (Matthew Atkinson) loved ones will wait and pray as Thomas is rushed into emergency surgery.

As B&B viewers know, Thomas is suffering from a subdural hematoma and he needs surgery to relieve the pressure and stop the seizures he’s been having. It’s a dire situation for sure, and the family will have nothing to do but wait for word on how the surgery is going.

It’s a terrible thought, but there’s of course the chance that Thomas won’t make it through surgery.

Thomas might not be strong enough to survive, given how compromised his brain is at this point, so it’s going to be a rough couple of hours for Steffy Forrester (Jacqueline MacInnes Wood), Ridge Forrester (Thorsten Kaye), Hope Spencer (Annika Noelle), and Liam Spencer (Scott Clifton) as they wait and worry.

And to add another layer of concern onto everything, now Steffy and Ridge know about Thomas’ bizarre behavior with the mannequin in the moments leading up to his collapse at his apartment.

That’s going to really concern Steffy and Ridge, as it just doesn’t sound like the Thomas they know and love. Perhaps John “Finn” Finnegan (Tanner Novlan) will be able to reassure everyone that Thomas’ head injury could have produced his bizarre symptoms.

It will be interesting to see what happens in the waiting area between Steffy and Liam during this time. Surely, Liam will want to tell Steffy what he’s recently learned – that Hope and Thomas didn’t kiss after all.

That’s going to lead Steffy to realize the enormity of what she and Liam did when they slept together, but she may want to put the issue on the back burner for the time being, at least until they see what happens with Thomas’ surgery.

Meanwhile on the new episode of B&B on Tuesday, December 8, Quinn Forrester (Rena Sofer) will decide to get snoopy in an effort to make sure that nothing’s going on between Eric Forrester (John McCook) and Shauna Fulton (Denise Richards).

The last we saw Quinn, she was still living over at Wyatt Spencer’s (Darin Brooks) house, and she was livid that Shauna didn’t move out of the Forrester mansion any earlier than she did.

Well, at this point, Shauna is supposed to be living elsewhere, but it seems that she and Eric will still be together for some reason. We’ll see how this all unfolds, but it looks like Quinn is going to do some eavesdropping when she finds Shauna and Eric sharing a conversation.

Perhaps Shauna will be comforting Eric over Thomas’ situation, but whatever the case, Quinn will listen in intently.

The Bold and the Beautiful spoilers say that Quinn will hear a telling conversation between her estranged husband and Shauna. Exactly what that conversation will end up being remains to be seen, but it’s likely that Shauna will once again tell Eric that he’s a great man and that Quinn’s lucky to have him.

Depending on how much Shauna gushes over Eric, Quinn may not like that.

It looks like Quinn might leave the situation thinking that Shauna is making a play for Eric. Of course, Quinn was already predisposed to think that Shauna wanted Eric, so it may turn into a situation where Quinn really reads into what she hears.

Whatever the case, it appears that Quinn won’t be amused, and the chances of she and Shauna ever reclaiming their friendship will diminish.

It sounds like a lot of B&B drama is heating up for Tuesday’s episode, so stay tuned! Remember, CDL is your go-to source for the latest Bold and the Beautiful spoilers, daily episode recaps, and news. We’ve got you covered!