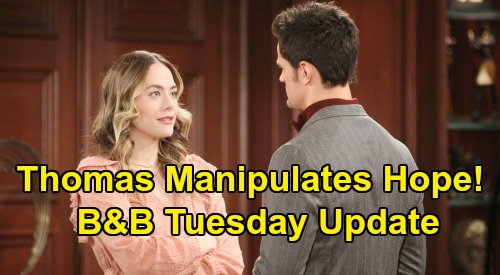 The Bold and the Beautiful (B&B) spoilers update for Tuesday, February 11, teases that Sally Spectra’s (Courtney Hope) secret won’t remain in the vault for long. She was hoping to keep her terminal diagnosis quiet, but Katie Logan (Heather Tom) won’t be able to follow orders. Bill Spencer (Don Diamont) will be the first one Katie blabs to – and he’s in for a real shock when he finds out!

Sally has always been a fierce, determined person. Although Bill has had his fair share of issues with Sally, he respects her on some level. They’re both passionate people who refuse to let obstacles stop them.

That’s why Katie’s news will really catch Bill off guard. It’ll be tough for Bill to wrap his head around the idea of Sally dying when she’s normally so full of life.

Katie will agree that Sally’s a fighter, but her doctors don’t believe Sally can win this battle. Sally’s world is crumbling as a result, but Katie doesn’t want her face it alone.

Naturally, Katie intends to be there for Sally, but she knows other people would rally around her if given the chance. Wyatt Spencer (Darin Brooks) has been terribly worried about Sally and would absolutely want details on her diagnosis.

Although Katie will be torn about spilling to Wyatt, Bill might nudge her into it. He may feel like the secret’s going to be exposed eventually, so Wyatt might as well know now. That way he can prepare for the inevitable and help Sally in her time of need.

Of course, Katie will still have concerns about betraying Sally, but Wyatt will indeed learn the truth by the time Wednesday rolls around.

Until then, let’s talk about scheming Thomas Forrester (Matthew Atkinson). Vinny Walker (Joe LoCicero) will get updates on all the Zoe Buckingham (Kiara Barnes) and Hope Logan (Annika Noelle) drama.

Vinny will hear about the next step in Thomas’ plot, which is sure to play games with Douglas Forrester’s (Henry Joseph Samiri) heart. The Bold and the Beautiful spoilers say Vinny will rip into Thomas and warn him to drop this devious plan.

However, Thomas will be convinced that he’s on the verge of victory. He won’t care what he’s putting Douglas through since a happy “Thope” family’s waiting at the end – at least according to Thomas! B&B fans can expect Thomas’ scheme to press on, so Vinny will just have to deal with it.