BY hellodrdavis on February 17, 2020 | Comments: one comment
Related : Soap Opera, Spoiler, Television, The Bold and the Beautiful 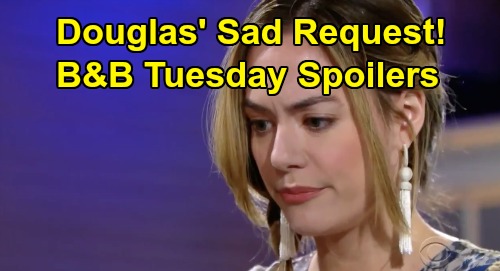 The Bold and the Beautiful spoilers for Tuesday, February 18, tease that Liam Spencer (Scott Clifton) will leave his conversation with Hope Logan (Annika Noelle) feeling frustrated. As B&B viewers know, he’s just demanded that Hope tell him that Thomas Forrester (Matthew Atkinson) isn’t getting to her and making her forget all of the horrible things he’s done in the past.

Hope’s silence pretty seems to have pretty much answered his question, but we’ll see what she says on Tuesday’s episode. Well, it seems that Liam will next head over to see Zoe Buckingham (Kiara Barnes), thinking that maybe he can talk some sense into her.

Liam will do his best to lay out exactly how he thinks Thomas is using her in order to get to Hope, including how he’s flaunting his relationship with her in front of Douglas Forrester (Henry Joseph Samiri) in order to provoke a reaction out of him. We’ll see if this gives Zoe pause.

Chances are, it won’t, since Zoe seems to really believe that Thomas is into her 100%. She probably figures the Thomas wouldn’t have slept with her and invited her to Forrester family functions if he was just using her as a chess piece in a twisted game.

But as B&B viewers know, Zoe sadly underestimates the lengths to which Thomas is willing to go to get what he wants.

Meanwhile, on the new episode of B&B on Tuesday, February 18, Thomas will keep at it with his plan to get Hope for himself. According to B&B spoilers, Thomas will manipulate Douglas once again – this time, by getting him to send an important message to Hope.

Thomas knows that Douglas is terrified of losing his Mommy Hope and having her be replaced with Zoe, and he’s going to use those fears to his advantage. The Bold and the Beautiful spoilers say that Thomas will make sure that Douglas tells Hope something that will really get her thinking about what’s best for Douglas.

Of course, Hope is always focused on what’s best for the children, so Thomas knows she’s really attuned to making the best life for Douglas possible. It looks like Douglas may go to Hope and share that he wants his Mommy and Daddy together like they used to be.

That’s sure to rattle Hope, and she might at first chalk all of Douglas’ feelings up to being upset by Thomas kissing Zoe at the birthday party.

In fact, she’ll probably feel that she needs to have a conversation with Thomas about how his affections for Zoe are affecting Douglas, which will give Thomas the opportunity to once again turn the tables on Hope and lament that what Douglas really wants isn’t possible…all because of her.

It’s a manipulative plan on Thomas’ part, and he knows that it will be hard for Hope to look Douglas in the eye as he says that he wants his Mommy and Daddy together again.

We’ll see what Hope’s response to Douglas is, and whether she totally shuts down the idea of her and Thomas getting back together, or whether she ultimately contemplates the possibility of being with Thomas again.

It looks like we’re in for some good B&B drama on Tuesday, so be sure to tune in! Stay with the CBS soap and check back with CDL for the all your latest Bold and the Beautiful spoilers, recaps, and updates.