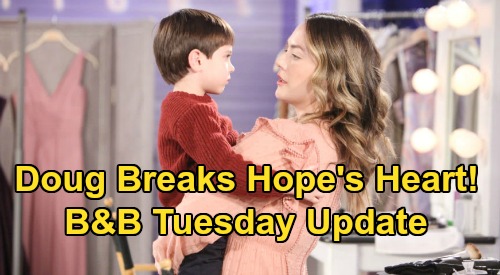 The Bold and the Beautiful (B&B) spoilers update for Tuesday, February 18, teases that Liam Spencer (Scott Clifton) will shift his strategy. He’s not getting through to Hope Logan (Annika Noelle), so he’ll turn his attention to Zoe Buckingham (Kiara Barnes) instead. Liam doesn’t want Thomas Forrester (Matthew Atkinson) to do any more damage than he already has, so he’ll try to protect Zoe’s heart.

B&B fans know Thomas is still scheming to be with Hope, but Zoe has convinced herself that Thomas has truly moved on. Anytime a hint of doubt bubbles up, Thomas’ reassurance is enough to make Zoe dismiss her concerns.

Nevertheless, Liam will work hard to make Zoe see this from his perspective. He’ll run down the list of manipulative things Thomas has done and urge Zoe to see that she’s being used.

Zoe can’t deny that Thomas has made mistakes, but she believes he’s changed and is trying to turn his life around. Despite Liam’s insistence that Thomas is a devious manipulator, Zoe just won’t agree. The Bold and the Beautiful spoilers, updates and news point to Zoe standing her ground for the most part.

However, Liam could stir up a few more fears – some that may sit at the back of Zoe’s mind as Thomas’ marriage proposal rapidly approaches. A rushed grand gesture like that is bound to raise red flags, so Zoe may end up wondering if Liam is right. That could be why a worried Zoe will make a significant request by the end of the week.

Until then, Douglas Forrester (Henry Joseph Samiri) will once again become a key player in Thomas’ plan. Thomas feels confident he can secure the ideal future for his son, so he’s fine with manipulating Douglas to make it happen. He believes it’ll all be worth it once they’re a happy family with Hope.

The Bold and the Beautiful spoilers say Thomas will plant an idea in Douglas’ head – or at least fuel one that’s already there. He’ll send an unsuspecting Douglas straight to Hope with a message, which is sure to leave her heartbroken.

It seems that message will involve Douglas’ desire to see his parents together. He’ll seem glum as he talks about how much he wants Mommy Hope back with Daddy.

Hope may promise Douglas that they’ll both love him no matter what, but that may not satisfy the kid. Now that Thomas and Zoe’s relationship is revving up, it’s got Douglas concerned and desperate. That’s certainly something Thomas can continue to work with in the coming episodes.