BY hellodrdavis on January 14, 2020 | Comments: one comment
Related : Soap Opera, Spoiler, Television, The Bold and the Beautiful 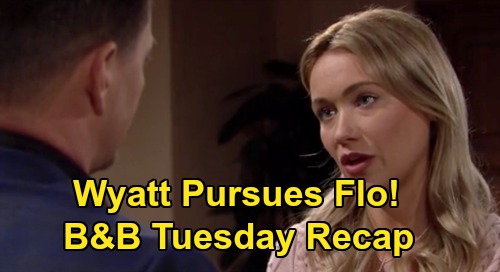 The Bold and the Beautiful spoilers recap for Tuesday, January 14, reveal that Steffy Forrester (Jacqueline MacInnes Wood) and Ridge Forrester (Thorsten Kaye) caught up in the Forrester CEO office. Ridge inquired about the ongoing situation with Hope Logan (Annika Noelle) and Liam Spencer (Scott Clifton), but Steffy didn’t want to talk about it.

Ridge then noticed some terrible-looking sketches laying around and asked about them. Steffy revealed that these were Sally Spectra’s (Courtney Hope) sketches, and that she was losing confidence in her as a designer.

Meanwhile, over in the Forrester design office, Sally sat sketching. As she tried to operate her pencil, her hand shook and didn’t seem to be working, and she ended up tearing up the design in frustration.

Sally then headed to the CEO office, where Ridge was in the process of saying that he “can’t save these sketches.” Sally was horrified as Ridge blatantly stated that her designs weren’t good enough for Forrester Creations.

Steffy added that they might not be able to move forward with the fashion showdown because of the poor quality of Sally’s designs. Sally protested, noting that she had put in a lot of hard work on the designs, and that she’d make whatever changes were needed.

But Ridge said that it just wasn’t working, and Steffy said that she’d already given her multiple chances to revise the designs. Sally wonder what this all meant for her, and Ridge said that they hadn’t made any decisions yet.

Sally then started hyperventilating and shaking, saying that working at Forrester Creations was everything to her. Steffy looked seriously worried as Sally’s hands started visibly shaking.

Ridge told her to take a breath and go home, and that they’d talk about this some other time. Sally then left, and as she walked into the hall, her hands were still shaking terribly, as she wondered aloud what was wrong with her.

Quinn noted that Flo had made some mistakes, but that she and Wyatt had similar backgrounds and besides, Wyatt still loved Flo. Wyatt stopped short of admitting he still loved Flo to his mom, but her words did strike a chord.

Quinn urged Wyatt to acknowledge his feelings and do something about it, rather than pretending in his relationship with Sally.

Wyatt admitted that he had overreacted to Flo’s mistakes when he broke up with her, and Quinn was quick to point out that his proposal to Sally never would have happened if he hadn’t overreacted. Quinn confidently noted that Flo was the woman that Wyatt really wanted to be his wife

While all this was going on, Shauna Fulton (Denise Richards) welcomed Flo into the guesthouse. Flo explained that she had taken some time away to do some soul-searching, including doing a lot of thinking about Wyatt.

Flo admitted to her mom that she would always love Wyatt, but that he’s engaged to Sally now. Shauna thought that things could change on that front, as things were rather awkward between Sally and Wyatt at Christmas.

Shauna urged her daughter not to give up on Wyatt, and she assured Flo that Wyatt knew what a caring, compassionate, and selfless young woman she was. Shauna told Flo to fight for Wyatt, and that it wasn’t too late.

Flo then deflected and asked her mom about Ridge. Shauna said that she was there for Ridge as a friend, and wherever it goes, it goes. Shauna then went to get the two of them lunch up in the main house.

In the Forrester living room, Shauna walked in as Quinn and Wyatt were talking. She surmised that they were talking about Flo, and she noted to a flustered Wyatt that the two of them were still good together. Wyatt bowed out of the conversation, with Shauna calling after him that Flo was in the guest house.

Wyatt headed straight for the guest house and caught Flo in a daydream about the two of them kissing last summer. They greeted each other and Wyatt noted that he hadn’t seen Flo around lately.

Flo replied that she had been laying low and taking time to herself to reevaluate her life and where she goes from here. She told Wyatt that she’s really missed him, and he returned the sentiment.