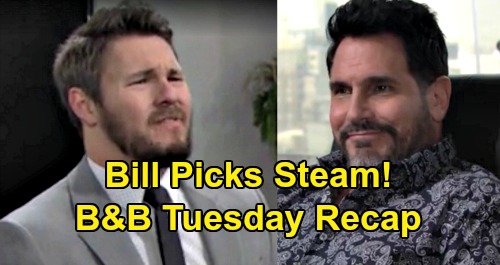 The Bold and the Beautiful spoilers recap for Tuesday, January 28, reveal that Steffy Forrester (Jacqueline MacInnes Wood) nearly told Liam Spencer (Scott Clifton) about how their kiss on the cliff came about as they talked at Steffy’s house. She managed to get out the words, “I have to tell you that Thomas…” but Liam stepped in and reminded Steffy that she had no part in derailing his relationship with Hope Logan (Annika Noelle).

Thomas Forrester (Matthew Atkinson) then came through the front door, just as Liam wondered why Steffy was bringing Thomas into this. Thomas pounced on the conversation and said that he’d been encouraging Steffy to tell Liam the truth about how she feels for months. Thomas went on about how Liam belonged with the family he had first.

Liam then accused Thomas of only wanting that so that he could have Hope, but Thomas protested, saying that he was with Zoe Buckingham (Kiara Barnes) now. Liam then got frustrated and left, saying he just couldn’t talk to Thomas.

Once alone, Thomas turned to Steffy and accused her of nearly telling Liam the truth about the kiss.

Steffy lamented about how she had been down this scheming road before and that she didn’t want to do this again, but that she did. Thomas then pulled out all his ammunition and went on about how if the truth comes out about the kiss, then she’d lose her chance at being a family again with Liam, plus Ridge Forrester (Thorsten Kaye) would think that he’s obsessed with Hope again.

Steffy then asked if Thomas was still obsessed with Hope, and Thomas said no, that he was with Zoe. Steffy warned him not to use Zoe as a ploy. Thomas reiterated that Steffy needed to stay quiet and do what she had to do for Kelly Spencer (Zoe Pennington), and that Kelly shouldn’t have to look at a photo on the wall to see how much her parents love each other.

Next, at Spencer Publications, Liam was distracted as Bill Spencer (Don Diamont) tried to talk business with him. Liam apologized, then said he couldn’t stop thinking about Hope. Surprisingly, Bill told him not only to get his focus on his work, but also to start rebuilding his life with Steffy. Bill insisted that Steffy was the woman for Liam.

Liam tried to say that it was all complicated, but Bill said that the only thing complicated in his life was Hope, and that Hope had brought that “degenerate Thomas” into their lives. He went on to say that Hope wasn’t happy unless she was in the middle of some crisis, and that Liam needed a woman who doesn’t add to his drama – namely, Steffy.

Liam lamented about how he thought his troubles with Hope would be over once they got Beth Spencer (River Davidson and Madeline Valdez) back, and Bill interjected that Hope got dragged into “Tommy the sociopath’s” drama.

Bill even wondered if Hope was secretly attracted to Thomas before confidently stating that Steffy was the woman for Liam. Liam looked exasperated by the whole conversation.

After Douglas left the room, Hope told Brooke that she missed Liam, but that he was asking too much of her wanting her to give up Douglas.

Brooke then insisted that Thomas was the one who put her in this position, not Liam. Hope protested, saying that she couldn’t blame Thomas for Liam and Steffy’s kiss. After all, Liam was the one who ran to Steffy when things didn’t go his way.

But Brooke insisted that Thomas is trying to cause chaos, and then she mentioned Shauna Fulton (Denise Richards). Hope wondered what was going on with Shauna.

Brooke explained about Ridge and Shauna’s kisses, and about how Quinn Forrester (Rena Sofer) orchestrated the whole thing by having Shauna move into the guesthouse at the Forrester mansion.

Hope was skeptical that Quinn actually wanted Brooke and Ridge to break up, but Brooke barreled on, blaming Quinn for it all. Brooke stated that they needed to fight “people like Quinn” and get “these manipulators” out of their lives.

Next, over at the Forrester mansion, Quinn had a chat with Shauna and lamented about Brooke’s interference in her marriage. Eric Forrester (John McCook) then came in and said he needed a few minutes with Quinn. Shauna skedaddled, and Eric told Quinn that Shauna could no longer stay in the guesthouse and that it was inappropriate.

After some more back-and-forth, Eric asked Quinn to go easy on Brooke, because he was concerned about her.

Eric went on to say that it’s never good when Brooke is separated from Ridge, and that this reminded him of when Brooke was drinking too much. Eric said that he’d hate to see her go to that dark place again, and a devious look flashed across Quinn’s face.

Eric then left, leaving Quinn staring at the booze bottles sitting in the living room.

Later, Shauna returned to talk with Quinn, revealing that she had packed her things, figuring that Eric wanted her to go. Shauna was gracious about the whole thing, saying that she’d go live with Flo Fulton (Katrina Bowden) again, and that she didn’t want to be a problem for Quinn and Eric.

Quinn fumed some more about Brooke and how she dragged Eric into this whole thing,

Quinn said that she was just sickened to hear Brooke’s words coming out of Eric’s mouth, and that she was furious that Brooke brought her character into question. Quinn then ominously stated that if anyone needs to leave this family, it’s Brooke, and that she’d put an end to her.