BY hellodrdavis on January 27, 2020 | Comments: one comment
Related : Soap Opera, Spoiler, Television, The Bold and the Beautiful 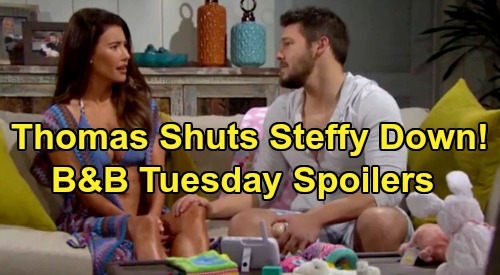 The Bold and the Beautiful spoilers for Tuesday, January 28, tease that Quinn Forrester (Rena Sofer) will get some disappointing news from Eric Forrester (John McCook). As B&B viewers know, Brooke Forrester (Katherine Kelly Lang) recently stormed into the Forrester mansion and ended up demanding that Eric kick both Shauna Fulton (Denise Richards) and Quinn out of the mansion. She was terribly upset that Shauna had kissed Ridge Forrester (Thorsten Kaye) and she lashed out big time.

Of course, Quinn was absolutely mortified that Brooke dared to march into her home and start making demands about not only her marriage but her dearest friend Shauna.

Yet Quinn felt pretty secure in the belief that Eric wasn’t going to give in to any of Brooke’s unreasonable demands. But on Tuesday’s new episode of B&B, Eric will have a little talk with Quinn, and she won’t like what she hears.

Eric will tell Quinn that he’s given the matter some thought, and that he’s decided that Shauna needs to move out of the guesthouse asap. He’ll insist that it isn’t a reflection on Shauna or on Quinn’s friendship with Shauna.

Quinn will hit the roof, saying that he’s asking her to kick Shauna out, but Eric will insist that this is about supporting Ridge Forrester (Thorsten Kaye) and helping him keep his marriage together.

Eric will think that if Shauna stays at the mansion, then it sends the wrong message. That will prompt Quinn to say that what Eric really means is that Brooke doesn’t like it, and that from her perspective, it’s Brooke who has crossed the line here, not Shauna.

Eric will protest, but Quinn will say that Brooke is accusing her of bringing Shauna and Ridge together.

Ultimately, Eric and Quinn will not be able to see eye to eye on the matter. Quinn will even try to persuade Eric that if Ridge wants to kiss Shauna and be with her, then it’s his decision…and their job isn’t to be the “relationship police” when it comes to consenting adults. Quinn will insist that if Eric makes Shauna leave, then all he’ll be doing is giving into Brooke’s overbearing demands.

But Eric won’t budge on the matter, and he’ll insist that Shauna has to go. Finally, Quinn will note that if this was just about Ridge and Shauna, then she’d understand, but that this went deeper than that.

Quinn will say that this is about letting Brooke call the shots in their home, and that Brooke isn’t showing respect for their marriage – after all, she told Eric to get rid of her.

Well, later, Quinn will have a talk with Shauna about the whole thing, and Shauna will be very understanding, although Quinn will fume that she’s not going to let Brooke get away with this.

Shauna will reassure Quinn that she’ll be fine moving back in with Flo Fulton (Katrina Bowden), and that it’s not the end of the world. Besides, she’ll say that she doesn’t want to be a problem for Quinn and Eric.

But Quinn will insist that Shauna’s not the problem; Brooke is. Quinn will fume that this is her home, and that Eric is her husband. Yet she’ll note that no amount of reasoning changed Eric’s mind, and Brooke got her own way.

And according to ongoing B&B spoilers, Quinn’s fuming will soon turn very dark, as she plots to go after Brooke with everything she’s got.

Meanwhile, on the new episode of B&B on Tuesday, January 28, Steffy Forrester’s (Jacqueline MacInnes Wood) confession to Liam Spencer (Scott Clifton) will get thwarted. As B&B viewers know, Steffy is on the verge of telling Liam the truth about how their kiss on the cliff really came about.

Steffy will be about to spill the beans that she intentionally kissed him right when Hope Logan (Annika Noelle) was approaching, and that Thomas Forrester (Matthew Atkinson) set up the whole thing.

But before she gets the chance to get the words out, Thomas will do something to interfere with Steffy’s confession. Whether he shows up at the door or calls at just the right time remains to be seen, but B&B spoilers are clear that he’ll stop her dead in her tracks.

Thomas will even promise her that she can have the family she deserves with Liam and Kelly Spencer (Zoe Pennington), which of course will be music to Steffy’s ears.

So, at least for the near future, Liam will be none the wiser about Thomas’ role in his breakup with Hope. One wonders whether the secret will ever come out, but of course even if it does, it might not make any difference as far as Liam and Hope’s relationship is concerned.

What upset Hope so much was that Liam was kissing Steffy back, so even if the kiss was a setup, the fact would remain that Liam was a willing participant.

At any rate, we’ll see if Steffy will now be willing to work with Thomas to get what she wants…or if her conscience will still be bothering her. She doesn’t have the same manipulative mindset as Thomas, so he may have to keep pressuring her to keep the secret as time goes on.