The Bold and the Beautiful Spoilers: Steffy and Liam Reboot Doomed – Hope Wedding Coming Soon, Is It Thomas or Liam?

BY Sean O'Brien on January 27, 2020 | Comments: one comment
Related : Soap Opera, Spoiler, Television, The Bold and the Beautiful 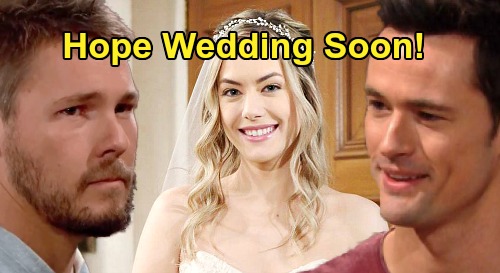 The Bold and the Beautiful spoilers tease that the momentum Steffy Forrester (Jacqueline MacInnes Wood) and Liam Spencer (Scott Clifton) appear to have is real. But Steam might realize a short reboot if the setup to the kiss is revealed. Nevertheless, a wedding for Liam might be in the offing!

B&B spoilers say Liam will likely never trust Thomas Forrester (Matthew Atkinson), based on what he did with the information that was known about Beth Spencer (Madeline Valdez and River Davidson).

When Clifton’s character learns that Steffy knowingly went along with her brother’s pressed scheme, an apparent tender moment will be revealed as a lie. And with that this one-time couple could be done, again.

Yes, the use of the word hopes was intentional in this section header. Hope Logan (Annika Noelle) is the woman that Liam believes he loves more than Steffy at the moment. His fully subjective take on the triangle that links him to Steffy, Hope, and both of his children has surely been influenced by the dramatic events that involved Beth’s kidnapping and return and could lead to marriage after all.

But B&B fans know that Liam’s love is actually divided, possible equally, between Hope and Steffy. That’s why the vacillation that’s been seen, where Liam bounces between both ladies, even after his daughters were born, implies that more of the same will persist.

If Liam learns that Steffy basically manipulated his emotions, Steam’s momentum will be dashed, or ended.

Lope Does Have Hope

The section header winks at optimism in this instance, rather than the character Noelle plays. While it seems as though all is lost, Lope could rebound if Steffy admits what happened and Liam relays the truth to Hope.

But it’s important to note that Hope’s insecurities where Steffy is concerned have been building for awhile. Hardcore viewers recall that Hope became very insistent that Liam tell Steffy that there would be no Steam reunion at the cliff house in the recent past.

While Hope’s fears seem to have been realized, she still loves Liam and wants him to be part of a family that raises Beth and her newly adopted son, Douglas Forrester (Henry Joseph Samiri). So forgiveness and reconciliation is possible.

The wild card in this engaging storyline is still Thomas. While it appears as though all factors are working in his favor and that Hope, incredibly, might pair with him, savvy viewers know that more plot needs to play out before even the immediate future can be generally predicted.

Thomas has been incapable of restraining himself in his obsessed quest to create and now to recreate a connection with Hope. With whatever happens this winter in this fictional version of Los Angeles, California, Atkinson’s quixotic character is primed to generate further drama and with that, the opportunity for Liam to play the defender of Hope once more.

A wedding for Hope is definitely a realistic outcome for the grieving Logan. The question remains will it be a Lope marriage with Waffling Liam or nuptials with tricky Thomas? CDL is a leading source for everything linked to The Bold and the Beautiful. Check back regularly for B&B spoilers and news!